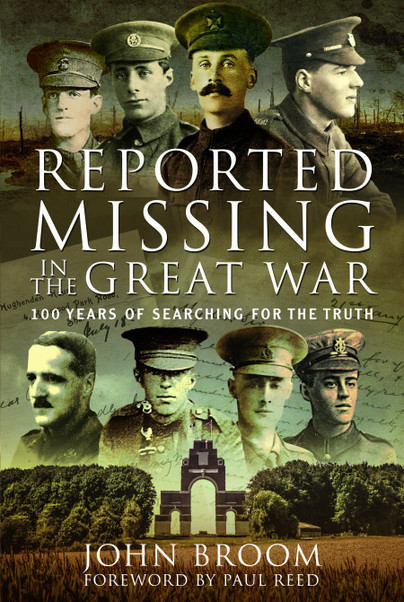 Add to Basket
Add to Wishlist
You'll be £25.00 closer to your next £10.00 credit when you purchase Reported Missing in the Great War. What's this?
+£4.50 UK Delivery or free UK delivery if order is over £35
(click here for international delivery rates)

It’s a fascinating book about research and new technologies that are now able to help. A great book if you like a mystery, and you like to sift through piles of papers and information to put the puzzle together. I would wholeheartedly credit the author John Broom, who has put all this together and has produced a great book that is well written, informative and clear to read. The book also comes amply supplied with a number of photographs and pictures of the soldiers involved. A book that really is good and appeals to those who love collecting information about this fascinating subject.

Listed in the ‘IN THE KNOW’ feature

This book looks at some of the men who lost their lives but of whom there were no remains, and at the impact this must have had on the families who awaited news of their loved ones. The amazing thing is that the organisations who continue to search for these lost lives are still turning up information. Brilliant.

I enjoyed reading these compelling stories of eight missing soldiers from the First World War. Their backgrounds, families and the sad circumstances of their deaths with no known grave are each sympathetically told so that it feels like you knew them. As the majority of the world was affected by this global conflict, this book also highlights the worries and hardships that most of our families must have experienced at the time. As such, this tells us some of what our own grandparents, great grandparents etc. must have gone through too.

Also included is the heartening and fascinating account that three of the families finally received some closure after over 100 years of waiting, when the remains of their missing soldier relative were at last discovered and they could visit their grave for the first time!

As a battlefield guide I have always thought that the term ‘missing’ was one of the cruellest (though unintentional) tricks played on the families of those soldiers who could not be found and identified. That telegram or letter that a loved one was missing opened the mind to the potential that the missing soldier was not dead and allowed hope to spring eternal. The author has compiled a narrative and examples that describe the context that therefore inevitably developed. The shame was that many soldiers who had seen how the soldier had died were unwilling or unable to say with the necessary clarity exactly how they died; often the details were too gruesome to bear repetition to those unfamiliar with death in the trenches. This book offers a good introduction to the subject. 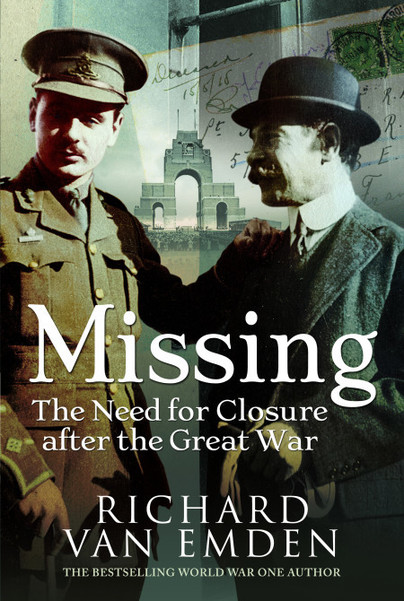 In May 1918, Angela and Leopold Mond received a knock on the front door. It was the postman and he was delivering the letter every family in the United Kingdom dreaded: the notification of a loved one’s battlefield death, in their case the death in action of their eldest child, their son, Lieutenant Francis Mond. The twenty-two year old Royal Flying Corps pilot, along with his Observer, Lieutenant Edgar Martyn, had been shot down over no man’s land, both being killed instantly. If there was one crumb of comfort, it was the news that a brave Australian officer, Lieutenant A.H. Hill, had gone…

Click here to buy both titles for £45.00
More titles by John Broom