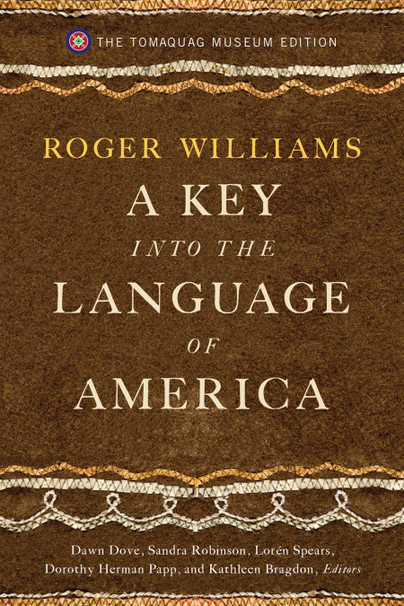 Roger Williams’ A Key into the Language of America (Paperback)

Add to Basket
Add to Wishlist
You'll be £20.00 closer to your next £10.00 credit when you purchase Roger Williams’ A Key into the Language of America. What's this?
+£4.50 UK Delivery or free UK delivery if order is over £35
(click here for international delivery rates)

Roger Williams’s Key into the Language of America, first published in 1643, is one of the most important artifacts of early Indigenous American culture. In it, Williams recorded the day-to-day experience of the Narragansett people of Rhode Island in their own words, the first documentation of an American Indian language in English. Williams’s Key can be read at many levels because of its historical, literary, political, and religious significance. Its greatest value, though, is its intimate portrait of the Narragansett and their linguistic neighbors in the early years of European colonial settlement, before disease, dislocation, warfare—in particular, King Philip’s War—and colonial interference had diminished their population and power in the region. An extraordinary achievement, Williams’s Key gives us a contemporary account of Narragansett family life, of their sociability and skill in business, their dress, foodways, and the farming, fishing, and hunting that formed the basis of their sustenance practices.

This new Tomaquag Museum edition includes for the first

time cultural commentary provided by the Narragansett Tribe as well as modern linguistic information provided by a leading authority in the study of American Indian languages.

The Tomaquag Museum, located in Exeter, Rhode Island, is an Indigenous nonprofit organization dedicated to shar- ing the culture, arts, and history of the Narragansett and other tribal communities of southern New England.

KATHLEEN BRAGDON, PhD, is professor of anthropology at the College of William and Mary. DAWN DOVE, BSEd, is a Narragansett Elder, language teacher, author, artist, and culture bearer. DOROTHY EDWARD PAPP, MEd, is a copy editor with a keen interest in Indigenous cultures.

SANDRA ROBINSON, MS, is a research scientist and a Narragansett language student. LORÉN SPEARS, MSEd, Narragansett, is the executive director of the Tomaquag Museum, and an artist, author, and cultural educator.