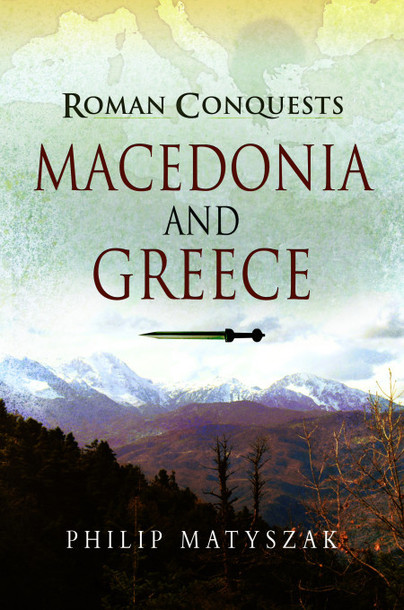 Add to Basket
You'll be £12.99 closer to your next £10.00 credit when you purchase Roman Conquests: Macedonia and Greece. What's this?
+£4 UK Delivery or free UK delivery if order is over £30
(click here for international delivery rates)

In the late 3rd century BC, while Rome struggled for her very survival against the Carthaginians in the Second Punic War, Philip V of Macedon allied with Hannibal in pursuit of his dream for a new Macedonian empire. Once Carthage was defeated, however, the Roman army for the first time turned its full attention to the Greek world.

The stage was set for the clash of two of the most successful military systems of the ancient world, the Roman legions versus the Macedonian phalanx. Though sorely tested, the legions emerged victorious from

the epic battles of Cynoscephalae and Pydna. The home of Alexander the Great fell under the power of Rome, along with the rest of Greece, the cradle of Western Civilization, which had a profound effect on Roman culture and society.

Philip Matyszak gives a clear narrative of the course of these wars, explaining how the Roman war machine coped with formidable new foes and the challenges of unfamiliar terrain. Specially-commissioned colour plates bring the main troop types vividly to life in meticulously-researched detail.