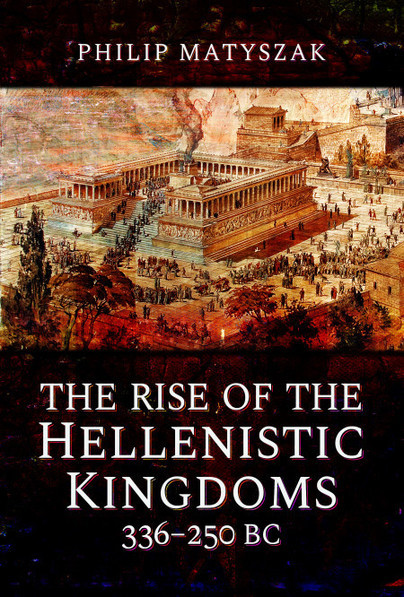 The Rise of the Hellenistic Kingdoms 336–250 BC (Hardback)

Add to Basket
Add to Wishlist
You'll be £11.99 closer to your next £10.00 credit when you purchase The Rise of the Hellenistic Kingdoms 336–250 BC. What's this?
+£4.50 UK Delivery or free UK delivery if order is over £35
(click here for international delivery rates)

When Alexander the Great died in 323 BC, he left an empire that stretched from the shores of the Adriatic to the mountains of Afghanistan. This empire did not survive Alexander's death, and rapidly broke into several successor states. These states, substantial kingdoms in their own right, dominated Asia Minor, Greece, the Levant and Egypt for the next three hundred years.

While Philip Matyszak’s narrative covers their remarkable contribution of the Eastern Greeks in fields such as philosophy, science and culture, the main focus is on the rivalry, politics and wars, both civil and foreign, which the Hellenistic rulers constantly fought among themselves. As in other fields, the Successor Kingdoms were innovators in the military and diplomatic field. Indeed, their wars and diplomatic skirmishes closely presage those of eighteenth century Europe and the superpower rivalries of the twentieth century. The complex interaction of these different kingdoms, each with its own character and evolving military systems, combined geopolitics and grand strategy with diplomatic duplicity, and relentless warfare. The epic story of the successor states is full of flawed heroes, palace intrigue, murder, treachery, incest, rebellion and conquest.

This is a good overview of the heyday of the Hellenistic kingdoms, one of the most interesting periods of Ancient history, if not always one of the best documented!

It is satisfying to read a book which plugs a gap in the history timeline.

The story of Ancient Greece, its City States, Kingdoms, Empire, heroes and Alexander is gripping stuff and this book tells its part of the story very well. There is a photo-plate section in illustration but this is a narration of an exciting story with heroes, false heroes and much action – Very Highly Recommended.

A good overview of the Rise of the Hellenistic Kingdoms that places the considerable changes of that period within the ruthless political context. It is comfortably written in that it is not an academic text but a reasoned and readable narrative that takes us through the period and its characters. The point is well made that these changes occurred during the period of two lifetimes which given the scale of change is thought provoking. Recommended.