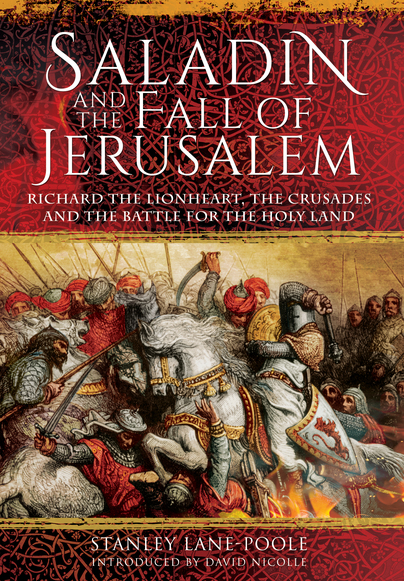 Saladin and the Fall of Jerusalem (ePub)

Richard the Lionheart, the Crusades and the Battle for the Holy Land

Click here for help on how to download our eBooks
Add to Basket
Add to Wishlist
You'll be £4.99 closer to your next £10.00 credit when you purchase Saladin and the Fall of Jerusalem. What's this?
Need a currency converter? Check XE.com for live rates

Saladin is a legendary figure in the history of the Middle East. His rise to prominence in the tumultuous arena of twelfth-century Middle Eastern politics was rapid and he quickly established himself as an intrepid statesman as well as a formidable military commander of great skill, but equally a man of honour.

This detailed biography of Saladin, and history of his life and times, was written by the eminent historian Stanley Lane-Poole, who was able to access the rich and colourful chronicles of Arab historians, which provide us with a brilliant insight into the life and deeds of this warrior-monarch.

Based on a lifetime of study, Saladin and the Fall of Jersusalem examines Saladin’s youth, his military development, his conquest of Egypt and Syria, the Holy War against the crusaders and, crucially, his duel with Richard the Lionheart, including the struggle over Acre and, of course, the fall of Jerusalem.


‘Stanley Lane-Poole has rendered valuable service in his different works by presenting various phases of Oriental history and life in such a way as to interest even those to whom such subjects are ordinarily a sealed book’.
The American Historical Review


“This book is a wonderful and enjoyable read that holds to the facts, and yet still weaves a good tale for the reader.”

This is a very readable account of Saladin’s life and achievements, from his involvement in Nuradin’s repeated attempts to conquer Fatamid Egypt, which swiftly led to Saladin’s unexpected promotion to Vizier of Egypt, his strained relations with Nuradin and on to the conquest of Syria in the aftermath of Nuradin’s death. We then move onto Saladin’s victory over the Crusader States at Hattin, the conquest of Jerusalem and most of the Crusader States, and his final campaign, against the forces of the Third Crusade. Saladin’s life had more than enough interest to justify a biography, and it is somewhat surprising that this was the first one in English, especially considering how popular he was in Medieval literature, and his role as the great opponent of Richard the Lion Heart, one of the great heroes of Victorian England.

This remarkable biography explores the life and exploits of a legendary sovereign and warlord: Saladin. Based on an in-depth study by a prominent historian, Stanley Lane-Poole.

An ambitious and very complete military biography
of Saladin.

Saladin is a legendary figure in the history of the Middle East. Based on a lifetime of study, Saladin and the Fall of Jerusalem examines Saladin’s youth, his military development, his conquest of Egypt and Syria, the Holy War against the crusaders and, crucially, his duel with Richard the Lionheart, including the struggle over Acre and, of course, the fall of Jerusalem.

Republished complete and unabridged with some minor alterations and the addition of introductory material by Dr David Nicolle, who also supplied the images in the picture section.
Stanley provides great detail about this battle; how the infantry maddened with thirst, scorched by the burning sun, and blinded by the flame and smoke of the bush which the Muslims had fired, lost their formation.

Stanley Lane-Poole was an eminent historian who specialised in studies of the Middle East. His works included The Moors in Spain, The Art of the Saracens and Cairo. Dr David Nicolle is an acknowledged expert on medieval military history, specialising in the Middle East.