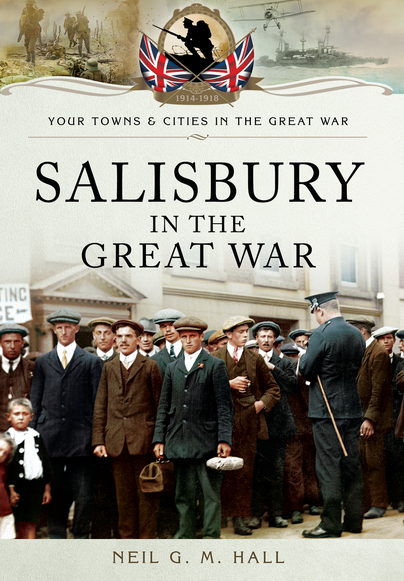 Salisbury in the Great War (Paperback)

Add to Basket
Add to Wishlist
You'll be £7.79 closer to your next £10.00 credit when you purchase Salisbury in the Great War. What's this?
+£4.50 UK Delivery or free UK delivery if order is over £35
(click here for international delivery rates)

‘The war invisibly regulated our lives’, commented a Salisbury resident when recalling the calamity, now known as the Great War.

Much of life in the city – with its ancient cathedral, the finest spire in England, medieval New Town built on ‘chequers’ and meeting place of five rivers – would be challenged. Vast areas of the nearby plain, recently purchased by the military, became an add-on, tented city as thousands of men responded to Kitchener’s call. Soldiers from the far-flung Empire arrived too, including one Canadian with his mascot bear. What bear? A bear, whose name would one day resonate in popular children’s books.

With a vastly increased population, trade boomed, but why were Special Patrols required in the dark alleyways? In contrast, how did some wounded officers, back from the trenches, find themselves surrounded by great masters in luxurious surroundings?

The war affected everyone. The mayor’s son won the Military Cross twice, while fellow citizens received heartbreaking telegrams. A parson’s son survived the sinking of the RMS Lusitania, but did he survive the war? Many did not, so families, businesses and country estates were gutted. Hardly a street or village failed to witness what Wilfred Owen called the sad ‘drawing down of blinds’.

In 1918 the war ended. The people of Salisbury had adapted, endured and ‘done their bit’. Surely they believed this had been the war to end all wars. Uniquely compiled from extensive archives, personal interviews and with striking images, Hall’s book unveils the minutiae of the Salisbury Home Front.


Neil Hall has filled his book with so much information that it is difficult to just focus on one part of it. This publication shows how Salisbury had supported, adapted and ‘done their bit’ to aid the war effort, and how all too many families had lost loved ones in the defence of their country. Having grown up in Bulford Village living on the plain all my life, having the army on manoeuvres more often than not, and also the planes flying from Boscombe Down it is difficult to comprehend a time when it was just a quiet farming community.

How were the towns and cities of the UK affected by the calamity that became known as The Great War? The Military Publishers, ‘Pen and Sword’, have addressed this issue in an illuminating series including the recent ‘Salisbury in the Great War’ by Neil G M Hall. Thoroughly researched with startling illustrations, interviews with surviving family members – one lady still lives on her own in the house where she was born in 1912 - and drawing on vividly documented records Hall plots the impact of an industrial war upon a sleepy cathedral city. As expected there was much pathos. The mother who advertises locally in an endeavour to find her soldier son only to discover that he is dead – killed in the Gallipoli campaign – is just one example. There is disaster as successful businesses crumble but dollops of humour too. In what circumstances did a very young publican’s daughter learn to sing “Mademoiselle from Armentières”? Interesting – and the reference to why the local fish-and-chip-man escaped conscription lightens the load as does the trial of the animal trainer accused of thrashing his chimpanzee. Did he? Hall invites the reader to discover for himself. Hall also poses a mystery. How did a Canadian’s mascot bear morph into a world famous children’s hero? ‘The war invisibly regulated our lives‘, so wrote a Salisbury resident. Away from the trenches Hall’s skills draw the reader into a wider understanding, not of battles and conflict, but the wider effect of war.

Neil Hall’s love of history was spawned by an inspirational teacher. Early lessons on the Great War, which killed two of his great uncles, made a vivid impact. Education at Marlborough College led to long cycle rides in the Wiltshire countryside and a familiarity with Salisbury. Years in London as an entrepreneur followed, with many ups and downs. A compulsive scribbler, Neil’s topsy-turvy life is described in his first book, An English Baby Boomer: My Life and Times. He is married and lives in Wiltshire.