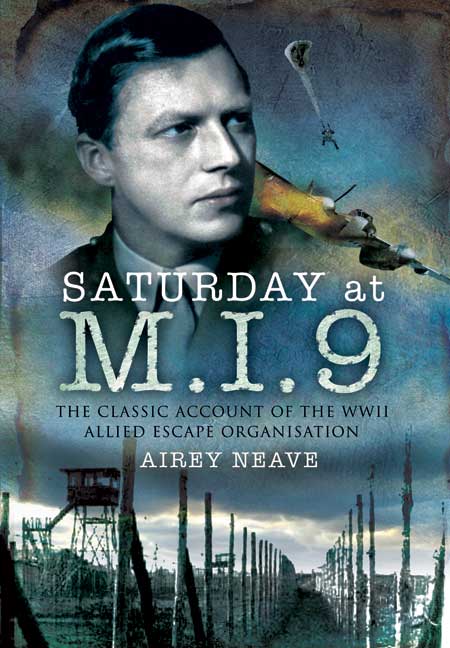 The Classic Account of the WWII Allied Escape Organisation

Click here for help on how to download our eBooks
Add to Basket
Add to Wishlist
You'll be £4.99 closer to your next £10.00 credit when you purchase Saturday at M.I.9. What's this?
Need a currency converter? Check XE.com for live rates

Saturday at M.I.9 is the inside story of the underground escape lines in occupied North-West Europe which brought back to Britain over 4,000 Allied servicemen during World War Two.

Airey Neave, who in the last two years of the war was the chief organiser at M.I.9 gives his own unique account. He describes how the escape lines began in the first dark days of German occupation and how, until the end of the war, thousands of ordinary men and women made their own contribution to the Allied victory by hiding and feeding men and guiding them to safety.

"There isn't a page in the book which isn't exciting in incident, wise in judgment, and absorbing through its human involvement." Times Literary Supplement.

Airey Neave was the first British POW to make a 'home run' from Colditz Castle. On his return he joined M.I.9 adopting the code name Saturday. He was involved in the Nuremburg war trials. His World War II memoir "They Have Their Exits" was republished by Pen & Sword in 2002 and his classic account of the fall of Calais

'Flames of Calais' is being republished in 2003. Airey Neave's life was tragically cut short by the IRA who assassinated him in 1979 when he was one of Margaret Thatcher's closest political allies.


This isa compelling tle of true-life bravery, looking at the activites of large groups of volunteers scattered across occupied Europe who chose to risk their lives in an attempt to help allied servicemen return to Britain to continue the fight against Nazism.

Whilst he was no doubt writing under the restrictions of the official secretes act, and many documents may indeed still be closed, it is quite possible that Airy Neave's account is an official account in all but name. I found it a revetting read.