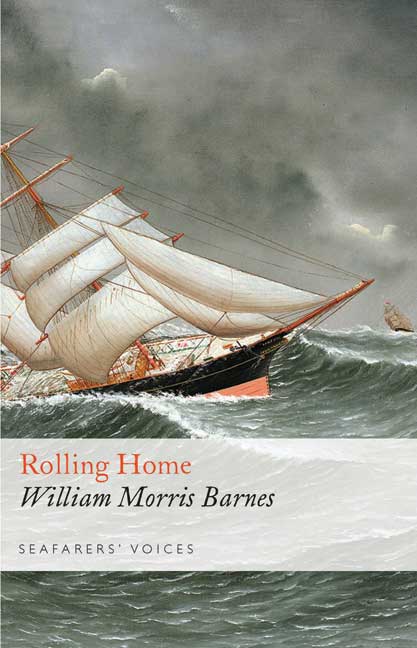 Add to Basket
Add to Wishlist
You'll be £13.99 closer to your next £10.00 credit when you purchase Seafarers' Voices 10: Rolling Home. What's this?
+£4.50 UK Delivery or free UK delivery if order is over £35
(click here for international delivery rates)

Barnes was born in 1850 into a shipowning family in St Johns, Newfoundland, and first went to sea while still a schoolboy. His career seemed predestined, and by the age of 14 he was apprenticed to a Liverpool company, serving in their sailing ships working a triangular passage to St Johns, the Brazils and back to Liverpool. He tried to 'swallow the anchor' when he married but running a grocery store was too mundane, and he soon went back to sea, transferring his skills to the now dominant steamships.

Even though he was 64, on the outbreak of the First World War he promptly volunteered for service. He does not seem to have regretted it, even after being mined or torpedoed three times; the last time he was badly injured and spent three days adrift in an open boat. Despite these disasters, like many a sailor, he was probably safer at sea – while in one port he fell for a rather exotic woman, only to discover she was a German spy.

When he eventually retired, to New York, he got to know a couple called Hilda and Denys Wortman. Denys was a newspaper cartoonist, who was rather taken with the gruff old sea-dog and based a character he dubbed 'Mopy' Dick on him for a series of popular cartoons. Meanwhile, Hilda encouraged Barnes to record his adventures and she eventually became the editor of the first edition of this book, imbuing the story with far more narrative flair than usually found in unliterary memoirs.

Barnes's remarkable life stories are shared through twelve comfortably-sized, engaging-written chapters, each one a pleasing combination of fast-paced action, sincerity of expression, quick wit, and below-decks perspective.
'Rolling Home' makes a fine addition to this important series, whose affordability, portability and animated writing style makes this history accessible to broad audiences. It will be of particular interest to those seeking adventure and a good yarn and may even hook others into delving deeper into the study of seafaring.

The tenth in this excellent series is a brisk, episodic account of a sailor’s life. Born in 1850, Barnes was from a Canadian seafaring family in St John’s, going to sea as a boy at age 11 , and it is clear he was a tough, pugnacious character, often in fights, and even once threatening to decapitate a difficult crew member with an axe. He remarks that an officer, certainly a bosun or mate, had to be able to best any of the men in a fight, of which there seem to have been many. Many of his trips were to the Caribbean and Brazil with attendant hazard from yellow fever, whose origin was not then understood. Once, as captain, he was taken for dead after drinking and drugging himself to cure fever, and astonished the crew, who were ready for his burial, when he emerged from his cabin. His account was recorded by a New York couple in the early 30’s, and as Vince McInerney remarks in the introduction, is unusual in that it describes his on – off courtship of his wife in some detail, and his other relations with women. Her death, and the fate of his children, are however, only mentioned in passing. He lived for the moment, and the crowd. He seems to have been quite restless, and fearless, preferring the incident of the sea to the monotony of land life. In his mid 60’s, he volunteered to serve for England in WW1, and had several remarkable adventures. I checked the sinking of the Saxonian, and the detail is all as described, except the U boat was U54, not U39. You will have to read the book to find out more! Recommended

This original work has now been sensitively edited by Vincent McInerney and formatted as an edition within the very successful 'Seafarers' Voices' series from Pen and Sword. This true account includes many fascinating ancedotes and includes the exotic woman the author fell for who turned out to be a German spy. This is an extraordinary and valuable book that provides an insight into life under sail and the transition steam, the experiences of peacetime voyages and the experiences of war near the end of an exciting life at sea.