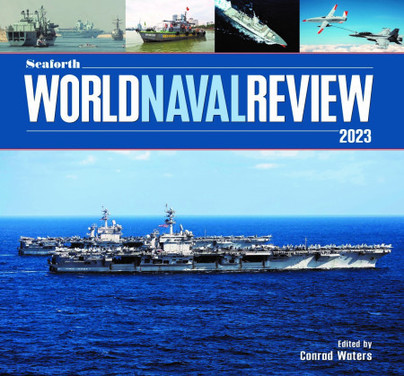 Preorder
Add to Wishlist
You'll be £28.00 closer to your next £10.00 credit when you purchase Seaforth World Naval Review. What's this?
+£4.50 UK Delivery or free UK delivery if order is over £40
(click here for international delivery rates)

This year’s edition has a strong American emphasis with one of the Fleet Reviews dedicated to the US Navy, and the latest of the in-depth ‘Significant Ships’ series covering the US Navy’s iconic Nimitz class aircraft carriers, now approaching half a century of service. Other ‘Significant Ships’ include New Zealand’s new logistic support ship Aotearoa, and France’s Suffren class nuclear attack submarines. Technological subjects range from the currently very topical issue of Hypersonic Weapons by Norman Friedman to the Royal Navy’s Technological Transformation Programme, as well as David Hobbs’ regular review of naval aviation which this year takes in an anlysis of HMS Queen Elizabeth’s worldwide CSG21 deployment.

Firmly established as the only annual naval overview of its type, World Naval Review is essential reading for anyone – whether enthusiast or professional – interested in contemporary maritime affairs.