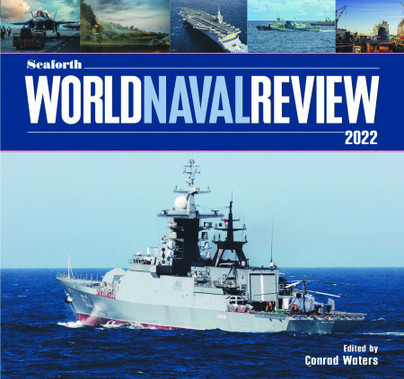 Add to Basket
Add to Wishlist
You'll be £28.00 closer to your next £10.00 credit when you purchase Seaforth World Naval Review. What's this?
+£4.50 UK Delivery or free UK delivery if order is over £35
(click here for international delivery rates)

For more than a decade this annual volume has provided an authoritative summary of all that has happened to the world's navies and their ships in the previous twelve months. It combines regional surveys with major articles on important new warships, and looks at wider issues of significance to navies such as aviation and weaponry. The contributors come from around the globe and as well as providing a balanced picture of naval developments, they interpret their significance and explain their context.

As well as its regular regional reviews, the 2022 volume focusses on three fleets: the Sri Lankan Navy, the Spanish Navy and the Royal Navy. There are in-depth articles on the Argentinian Bouchard Class OPVs, the Russian Project 20380 Stereguschchiy Class corvettes, and the Royal Navy's Batch 2 'River' Class OPVs. The technological section looks at optronic systems and offboard mine countermeasures, and there is the regular review of what is happening in naval aviation, which includes coverage of the US Marine/Navy MV-22 tiltrotor.

Now firmly established as the only annual naval overview of its type in the world, The Seaforth World Naval Review is essential reading for professional and enthusiast alike. It takes the reader to the heart of contemporary maritime affairs.

' … this is a marvellous asset for those wishing to keep up to date with naval matters. Very highly recommended.' Warship World

This annual publication, which first appeared in 2010, has earned a high reputation and is eagerly awaited by students of the world’s navies of today. The successful format remains the same and represents the facts in a clear and easily understandable manner.

This book is very good value for money, particularly when compared with its larger, more established competition, where much of the data remains the same from year to year.

I have remarked in previous reviews of the series that the World Naval Review is THE book to consult if you wish to keep up to date with naval developments. Its excellent contributors have once again produced an authoritative and highly informative “annual”. Superb stuff!