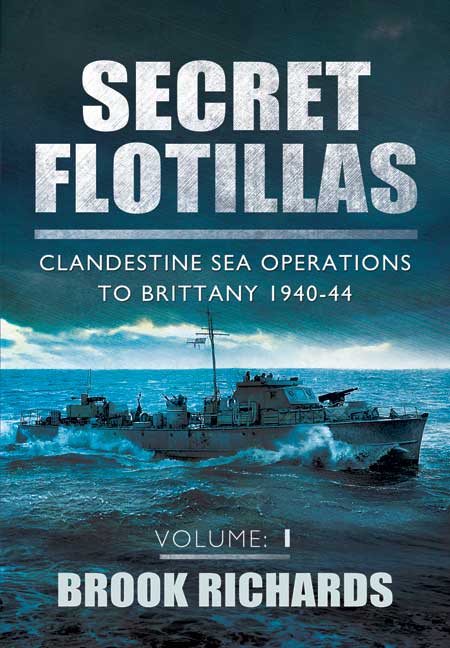 Click here for help on how to download our eBooks
Add to Basket
Add to Wishlist
You'll be £4.99 closer to your next £10.00 credit when you purchase Secret Flotillas Vol 1. What's this?
Need a currency converter? Check XE.com for live rates

As the fall of France took place, almost the entire coastline of Western Europe was in German hands. Clandestine sea transport operations provided lines of vital intelligence for wartime Britain. These "secret flotillas" landed and picked up agents in and from France, and ferried Allied evaders and escapees. This activity was crucial to the SIS (Secret Intelligence Service) and the SOE (Special Operations Executive). This authoritative publication by the official historian, the late Sir Brooks Richards, vividly describes and analyses the clandestine naval operations that took place during WWII. The account has been made possible through Sir Brooks' access to closed government archives, combined with his own wartime experiences and the recollections of many of those involved.

First published in 1996, the original edition included descriptions of naval operations off French North Africa. The history has now been amended and expanded by Sir Brooks and is now published in two volumes. This first volume concentrates on the sea lines to Brittany.

This important history of little known naval 'sideshows' is written in the style of an adventurous yarn and I look forward to the second volume. Highly recommended.

This gripping book is more 'cloak & dagger' than 'pen & sword', telling the fascinating story of the secret activities of small craft and the boats of the 15th MGB (Motor Gun Boat) Flotilla and Inshore Patrol Flotilla. As a youngster, I had been enthralled by Neville Shute's 'Most Secret' and the exploits of the Scarlet Pimpernel and this book is just as exciting only here it is not romantic fiction but the true story of those brave and very dangerous operations. I was amazed at just how many operations had been carried out and by such a comparatively small band of people on both sides of the channel. The late Lieutenant Commander Sir Brook Richards participated in the operations and was awarded a DSC for gallantry under fire, so was able to write the book from first-hand experience. He was also given free access to official documents and so was able to produce a convincing, accurate account.

Fluent in French and with a very well-developed political nose, Richards opens with a brilliant account of the politics of the Fall of France and how de Gaulle came to lead those Frenchmen who sought to carry on the fight. Brooks also explains the genesis of the SOE and SIS and their often prickly relationship, and difficulties of working with the Free French, whose initial amateurishness and woefully poor grasp of security caused endless problems. There are a number of photographs of people and boats that put flesh on the bones of the stories recounted. This is an important, permanent work of naval history.

This book is a quite remarkable account of the undercover activities of Britain's Secret Intelligence Service and Special Operations Executive during the Second World War. Because of the essentially clandestine nature of these activities, public knowledge of them has generally been scant compared with the better known facts and stories of the global conflict. Brooks Richards' book fully redresses this omission. His own personal involvement in these aspects of the war, backed up by what must have been a gargantuan amount of research, has enabled him to produce an amazingly detailed and enthralling story.

Great credit is due to Brooks Richards for recording hugely important elements of World War II that otherwise might have been lost to history.

This book is a large publication full of 'on the edge' accounts of these clandestine voyages which were carried out in the main by Royal Naval reservists but all very brave men. Overall the book illustrates in quite some depth a little known aspect of secret operations bravely carried out by members of the Royal Navy during the 1940s. I have no hesitation in recommending this publication.