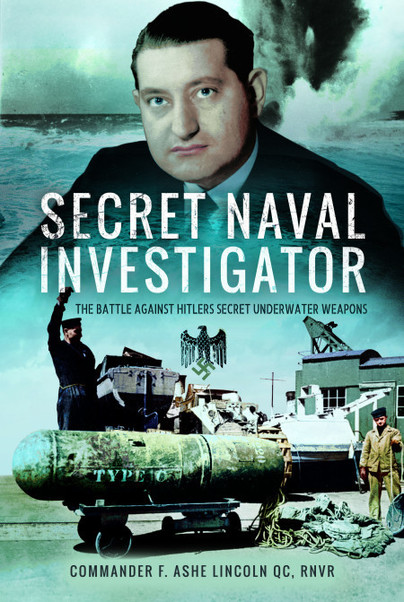 Add to Basket
Add to Wishlist
You'll be £19.99 closer to your next £10.00 credit when you purchase Secret Naval Investigator. What's this?
+£4.50 UK Delivery or free UK delivery if order is over £35
(click here for international delivery rates)

In the lead-up to the Second World War, Ashe Lincoln, a junior barrister, had enlisted in the Royal Naval Volunteer Reserve as a Sub-Lieutenant. On the outbreak of war he became determined to serve at sea and was posted to minelayers. But a mysterious midnight summons sent him hurrying from his ship to the Admiralty in London and a top-secret conference presided over by Winston Churchill.

Ashe Lincoln soon found himself pitting his wits against brilliantly skilful German scientists and technicians. These were the men Hitler had entrusted to devise secret underwater weapons sea mines and torpedoes of new and often unsuspected types to destroy Britains seapower and starve its population into surrender. The part that Ashe Lincoln played in this battle had been decided upon because he was a naval officer who combined legal training with a specialist knowledge in this particular aspect of naval warfare.

In time, Lincoln began a key figure in a small group in the Admiralty whose exploits have been almost forgotten. He found himself in extraordinary situations, including crouching on a bleak Scottish hillside dealing with the first parachute mine knowing that Goering had boasted that no-one would live to do this. His story is a remarkable blend of deductive enterprise and courage.

This book was fascinating from start to finish. I can't recommend it highly enough.

Anyone with an interest in this field of warfare will find this book invaluable.

This is a very welcome reprint of a brilliant book and comes with an all new foreword. Another real page turner about a largely forgotten, and yet fascinating side to the war at sea most people never got to hear about.

A remarkable blend of deductive enterprise and courage and a most enjoyable read.

There are many aspects of this book that makes one sit up. The incredible number of George Cross and George Medals awarded to those involved in what was described as 'rendering mines safe', sadly many of them posthumous, is testament to the courage of those who dealt with the mine menace.
The author died in 1998, but his simple statement in his introduction that 'his overall recollection is one of great pleasure and a feeling of gratitude for having had the privilege of serving' is very humbling.
First published in 1961, this is an amazing tale of individual heroism which fully merits being republished and is very highly recommended.

First published in 1961, this is an amazing tale of individual heroism which fully merits being republished and is very highly recommended.

The author died in 1989, aged 90, but fortunately he took the time to write this enthralling account of one of the least told important stories of WWII. The Royal Navy attracted a wide range of very different individuals to the Royal Naval Volunteer
Reserve in the months before the outbreak of WWII. The author was a barrister who became a specialist in investigating German underwater weapons and neutralising them – Very Highly Recommended.

Fredman Ashe Lincoln was born in Bradford in 1907. Called to the Bar by the Inner Temple in 1929, he enlisted in the RNVR in 1937. He joined the Royal Navy as a sub-lieutenant when the Second World War began. For his work in the recovery of one of the first magnetic mines he was Mentioned in Despatches. Ashe then volunteered for the Commandos and took part in the Allied landings in Sicily and Italy, again being Mentioned in Despatches for his part in the landings at Salerno, before serving in the North West Europe campaign. In the City of London Lincoln was a liveryman and Master of the Worshipful Company of Plasterers between 1949 and 1950. He died on 19 October 1998 aged 90.