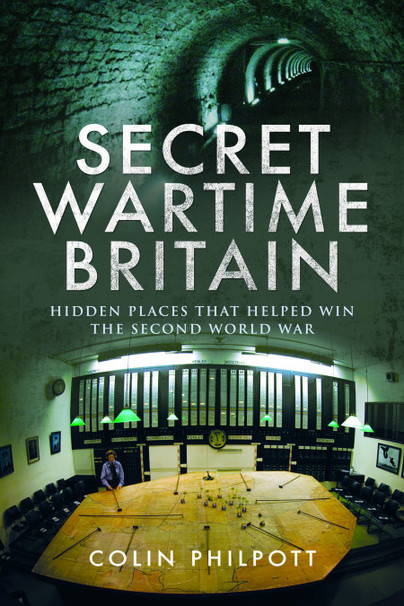 As featured by the Mail Online, November 2018: The secret sites that helped win WWII. Read the article in full here.

You'll be £14.99 closer to your next £10.00 credit when you purchase Secret Wartime Britain. What's this?
+£4.50 UK Delivery or free UK delivery if order is over £35
(click here for international delivery rates)

During the Second World War, thousands of sites across Britain were requisitioned to support the war efforts. Additionally countless others were built from scratch regardless of cost. Often the purpose of these locations was concealed even from those living close by.

The author of Secret Wartime Britain has compiled a fascinating collection of examples that still exist today, albeit often in different usage. They include underground factories, storage sites and headquarters; spy and communication centres; interrogation and POW camps; dummy sites; research facilities such as sinister Porton Down; treasure stores in stately homes and even royal retreats in the event of invasion such as Madresfield Court.

Where were these sites and why were they needed? How successfully were they kept secret? What has happened to them since? Were they returned to their owners? Answers to these and other questions make Secret Wartime Britain a riveting and revealing read.

This is a really fascinating read that explores one of the few facets of Britain in World War II that have not yet been explored... Most will find this a very readable book and a riveting read that will spark an interest that may lead to more research. Highly recommended for all interested in secret Britain during this period of history.

Acknowledged in 'An Engineer's Day Out' article, as featured by

The nicely illustrated volume includes, in addition to the War Rooms in Whitehall, several Churchill-related locations, such as Ditchley House, the little-used Cabinet War Room at Dollis Hill, and “Churchill’s Toyshop” at The Firs.

Observant members of YCDSME will have noticed the traces of Goldsborough Station on the York to Knaresborough line. There is a former signal box of unusual design, much later than the small North Eastern Railway types on this line. There is a large storage facility nearby but no longer rail connected. This was the site of one of forty three cold stores built during the Second World War for the storage of emergency food supplies. It was built in 1941 and like others rail connected but away from population centres considered vulnerable to bombing. It held stores in case submarine warfare further limited food transport across the Atlantic.

A valuable insight into little known aspects of British history.

Featured in the 'reading corner'

An interesting facet of the book is that the author had not flinched from including a few aspects of the war effort where those involved may have fallen short of upholding high standards in their work. By not ignoring the ethical question of whether the ends justify the means, the narrative becomes linked to present times when the moral dimensions of conflict are much more publicly debated.

Secret Wartime Britain is a book which can be read as a complete narrative or dipped into chapter by chapter depending on each individual’s interest. It is a fascinating book on first reading and one which would be worth returning to in the future.

This is a well-written and meticulously researched book, covering the many places in Britain which supported the war effort. Colin Philpott doesn’t try to discuss all such sites (there were over 8000 after all), but makes an interesting selection, illustrating them with many facts and first-hand accounts from people who worked there. You’ll find some things you’re familiar with, but other places you may have driven past for years without knowing their secret history. You’ll also read that Britain too had secrets it might not be too proud of, for example production of chemical weapons. I recommend this book to anyone with an interest in World War Two, and also local history.

A riveting read, and a tribute to the generations across the world who lived and lost their lives through these devastating times.

Article: Town had vital but 'hidden' role to play in Second World War as featured by

This is the kind of book that might inspire one of those brilliant Channel Four documentaries that could be presented by someone like Tony Robinson or even Michael Portillo. Crammed with fascinating tales of amazing excavations and creations that in some way or other were planned to help Britain to win the second world war, Colin’s book is a revelation, and hugely enjoyable. Boys’ Own Paper stuff in many cases, but absolutely terrific.

“a fascinating read in every respect”

Article: 'Beaches of East Lothian had vital role in D-Day landings as featured by

Author article: From factories to East Lothian beaches – how the war was won as featured by

This new 246-page hardback book from Pen & Sword and author Colin Philpott is a real treat. There are a host of individual sites around the British Isles which are included in here and each has a story to tell... A fascinating book and to sum things up, I loved it.

Interview article: Silence was secret weapon of war on the Home Front as featured by

Article: 'Harrogate's secret links to Bletchley Park' as featured by

It’s a great read, beautifully illustrated with current and period pictures. Definitely one for those with an interest in the wartime years.

Article: 'Book tells of tank testing at Clumber' as featured by

Article: 'Plotting rooms, secret underground bunkers - how silence and secrecy helped to win the war' as featured by

An interesting compilation of British locations, some not so secret, that were important to the conduct of the Second World War. Well researched and with useful contemporary and modern photographs, it is a useful addition to the bookshelf.

Colin Philpott has a long-standing interest in recent German history and in abandoned buildings and venues.

His first book A Place in History, looking at the impact on places where news stories happened in twentieth century Britain, was published in 2012. His drama The Last Match about the last day of peace before World War Two, was first performed in 2014.

He is a former Director of the National Media Museum and was a BBC programme-maker and journalist for 25 years. He also works as a non-executive director, a producer on creative and media projects and as a radio and event presenter.He lives in Knaresborough, North Yorkshire.