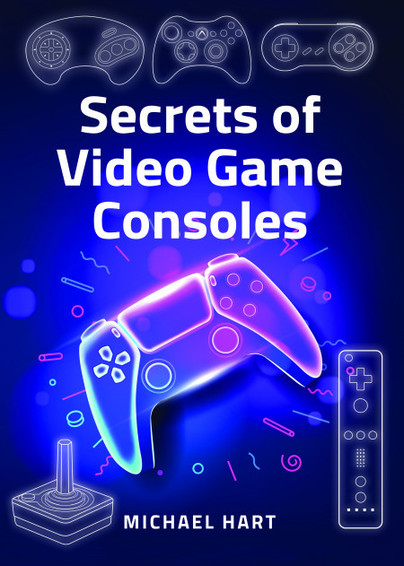 Preorder
Add to Wishlist
You'll be £28.00 closer to your next £10.00 credit when you purchase Secrets of Video Game Consoles. What's this?
+£4.50 UK Delivery or free UK delivery if order is over £40
(click here for international delivery rates)

Did you know the Nintendo Wii had a medical condition named after it? Or that the Sega Saturn almost had the Nintendo 64's graphics chip? Did you realise the Atari Jaguar contained five different processors? Are you aware that a fake website about beekeeping was used to promote an Xbox game? Learn about all of this and more in this unique trivia book about the history of video game consoles that gives you the complete stories in detail!

These facts cover a wide range of subjects, such as which console introduced certain technology and features, esoteric hardware oddities, marketing fails and successes, stories behind key games, how certain indispensable people shaped the whole industry, development history, court cases, peculiar events, weird relationships between companies and technical explanations. Plenty of these would be obscure facts that you may not know, but even if you are familiar with them, do you know the full story? 31 video game consoles stretching from 1972 to 2017 are covered, containing more than 235 in-depth facts, numerous other pieces of trivia and over 350 images to create a single package unlike any other that gamers of all ages will find interesting!

If you want to fill your head with plenty of knowledge about your favourite video game consoles to amaze your friends with, then this is for you!

This was right up my 11 year old's alley. He's a huge fan of the story behind the the story and, of course, video games. We read this together and it was hugely enjoyable.

I could see this being a big hit with other nerdy middle grade kids, or truly anyone with a love of gaming and history.

This was an incredibly fascinating read for me. As someone born in the nineties, I was completely unaware of many of the consoles mentioned in the initial chapters here, such as the Magnavox Odyssey or the Fairchild Channel F from the seventies. I really liked how Hart included information on the different “firsts” in console history (like how the Fairchild Channel F was the first home console with a microprocessor, or how the Intellivision “is recognized as having the first ever online service for a game console” in 1981!!!). There was a lot of background information on the video game industry I hadn’t known much about, such as Sony collaborating with Nintendo on sound chips and the attempt at a CD collaboration. It was really interesting to see how certain decisions negatively affected a company or the industry in general. Nintendo’s usage of cartridges resulted in less interest from developers due to the cost and less amount of space, for example. And the Sega Saturn launch was another poor management decision. I wonder where some of these products and/or companies would be today if management had been more competent.

I really recommend this book to all fans of video games, the story behind is really interesting and really gives us insight why some changes happened the way they did.

Born in Sydney where he has lived most of his life, Michael is a child of the 1980s and started playing video games at a young age on his first console, the Intellivision. From there he continued his love for games and has been a professional in the video game and home entertainment industry since 2003. He has worked on titles such as L.A. Noire, World of Tanks and Death Squared, has webmastered gaming websites in the past and has his own gaming-related YouTube channel.