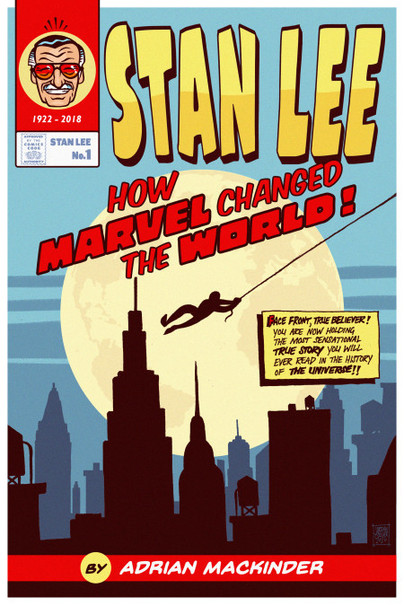 How Marvel Changed The World

Add to Basket
Add to Wishlist
You'll be £15.99 closer to your next £10.00 credit when you purchase Stan Lee. What's this?
+£4.50 UK Delivery or free UK delivery if order is over £35
(click here for international delivery rates)

Stan Lee is not just another biography. It is a journey through twentieth century American history, seen through the life of a man who personifies the American Dream.

This book shows how Stan’s life reflects the evolution of American entertainment, society and popular culture throughout the 1900s and beyond. Along the way, bold questions will be asked. Was Stan Lee himself a superhuman creation, just a mask to protect his true, more complicated secret identity? Just like the vibrant panels of the comics he wrote, Stan’s life, it seems, is never black and white.

Sourced from Stan’s own words, this book also includes brand new and exclusive interviews with Marvel comic book creators, for whom Stan’s work proved an invaluable inspiration. Upbeat, accessible and fun, this book is told with a glint in the eye and a flair for the theatrical that would make Stan proud.

This is a bold celebration of the power of storytelling and a fitting tribute to Stan Lee’s enduring legacy. Excelsior!

Being an avid Marvel fan I couldn't wait to get stuck into this & it didn't disappoint. Fantastic book about the legend & creator of the comics & movies Stan Lee.

As far as the world of comics goes, Stan Lee was probably the most important person to have ever lived. Born to a Romanian-Jewish family in New York in 1922, young Stanley Lieber became involved in the world of comics early. An office boy in the 1930s, by the end of a frustrating 1950s, Lee came close to quitting the world of comics forever until his Newcastle-born British wife suggested he create a new crop of comic superheroes to challenge the near monopoly then enjoyed by Superman and Batman creators, D.C. In a remarkably short space of time, Lee created Spider-Man, The Fantastic Four, Iron Man, The X-Men and The Avengers essentially establishing Marvel as the incredibly profitable global media powerhouse that it remains to this day. Happy ever after?
Well, no. Partly because, as Adrian Mackinder explains, the extent to which Lee can really claim complete credit for creating all these amazing characters remains hotly disputed. This is not a hagiography and while Lee was careful to cultivate a loveable avuncular image amongst Marvel's armies of 'True Believers,' Mackinder, though clearly a big fan himself, does not shy away from exploring the less desirable elements of Lee's character.
In short, Mackinder not only does a commendable job of detailing the highs, lows, creative explosions, fallings out and film cameos which made up Lee's almost 96 years on Earth but also does a commendable job of explaining the cultural context in which they occurred. In addition to Lee's life, we also learn a lot not only about the history of Marvel comics, but also get much on how vaudeville declined in the teeth of competition from radio and cinema in the 1920s and 1930s and much of interest about ALL comic adaptations on TV and film over the decades, not just the Marvel ones. It is easy to forget, despite the renaissance in comic book based films in the 21st century,, just how many flops there also were (Daredevil, Elektra, Ghost Rider, to name but a few).
I must admit: I have sometimes written about the history of comics myself. But ultimately, I must put aside any feelings of professional jealousy and concede: Adrian Mackinder really has done an exceptional job here.
Nuff said.

I'm not a fan of MCU movies, I find a lot of their plots leave me absolutely cold. I really like comics though, and more than that, I like books that are about the origin stories of those comics-most of them have fascinating backstories. 'The amazing adventures of Kavalier and Clay', for instance, is a book I absolutely love for its fictional setting in the Gold Age of comics. This was a fascinating non-fictional account, tracing not just Stan Lee, but the context he started in, right from the Golden Age of comics, and the origins of DC Comics, apart from Stan Lee's illustrious co-creators, Jack Kirby and Steve Ditko. Stan Lee has been accused of overstating his role in the creation of Marvel's iconic characters, and this book attempts o present an objective view, with competing perspectives. For a work as collaborative as a comic, that requires an entire team to bring it to life, assigning credit is very difficult-a writer might have the idea, but is his contribution more valuable than the artist's, who actually brings it to life, and adds in his contributions as well? The obvious solution is to list all the contributors, but Stan Lee seems to have been the only one who realized the importance of getting your name on a byline! It's not a hagiographical account by any means, but it's not entirely cynical either-Stan Lee played a part in the foundations of a comic empire that to this day holds sway over the imaginations of millions. Stan Lee seems to have worked tirelessly to promote ( also self-promote) Marvel, going on the lecture circuit and fan conventions long before they were huge showcase events, all contributing to his myth as founding father. I really liked the book for focussing on the comic book business, and how Marvel has sustained as a company, and as a medium of entertainment, despite the competing avenues of entertainment coming up every generation: radio, television, the Internet-people are still buying and reading comics. It's not always been smooth sailing for Marvel, but they've managed to sustain through multiple changes of ownership and even bankruptcy at one point Stan Lee, however, has always been retained as an employee and 'The Face of Marvel' ( I'm not entirely sure how he managed to stay so relevant well into the 21st Century).
As i said, I may not like most of the cinematic output of Marvel ( apart from Sam Raimi's Spiderman and Black Panther) , it's astonishing to see how popular the movies are, given that they're just tweaked a bit from comics written nearly 4 decades ago. This is a fun, insightful read into a cultural behemoth, and I would recommend it even for people who aren't comics fans.

This is a fascinating read that takes you through the birth of Marvel and interweaves its story with others like DC. The author obviously has a great interest in the genre.
The book shows the development of Marvel its problems along the way and how Stan Lee made himself the face of the comic.
This really is a great read if you are into the genre or not.

I definitely found this a compelling read. It isn't a traditional biography perhaps. I would say at least two-thirds of the book focuses on MARVEL--those who worked there, the characters created both heroes and villains, the story arcs, etc--and Marvel's place within the world. It seeks to provide not only an origin story for Stan Lee himself (Stanley Martin Lieber), but to provide an origin story for COMIC BOOKS and their place in publishing history. It is hard to imagine a world without super heroes--whether Marvel or DC.

I didn't find it dry. As I mentioned earlier, I found it compelling. I wouldn't be surprised if some chapters held more interest than others for readers. But overall, I do like this one! I learned so much!

Adrian Mackinder is a writer and performer. He has twenty years’ freelance experience scribbling for just about everyone, from The Guardian, British Government and the BBC to Cartoon Network, LEGO and The Beano.

Adrian is also a professional improviser, actor and comedian. Head Writer at Comedy Central UK for five years, he has performed live on stage in the UK, US and mainland Europe. Adrian lives with his family in Copenhagen where he struggles daily with being an Englishman abroad.