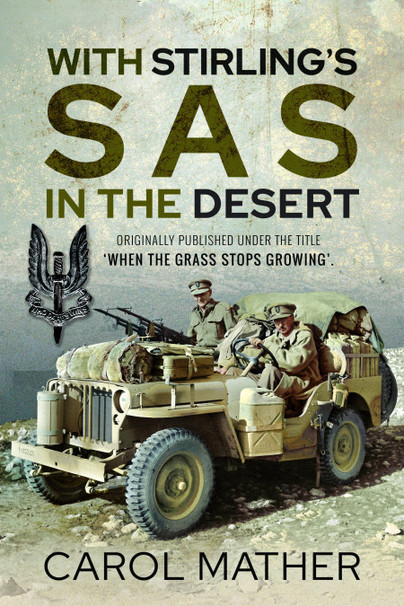 With Stirling's SAS in the Desert (Paperback)

When the Grass Stops Growing

Add to Basket
Add to Wishlist
You'll be £11.19 closer to your next £10.00 credit when you purchase With Stirling's SAS in the Desert. What's this?
+£4.50 UK Delivery or free UK delivery if order is over £35
(click here for international delivery rates)

Carol Mather had a remarkable war. After joining a ski battalion which never made it to Finland, he is sent to Scotland for Commando training before being posted to North Africa, where he meets such colourful characters as Randolph Churchill, Evelyn Waugh, David Stirling and Shimi Lovat.

As an early member of Stirling’s newly formed Special Air Service, he is involved in thrilling exploits in the Western Desert before becoming a liaison officer on Monty’s personal staff. In this role he has a front-seat view of the Battle of El Alamein.

After the battle, he returns to the SAS, is captured on a dare-devil raid and sent to a POW camp in Northern Italy from where he escapes making it back hundreds of miles to Allied lines. Sent home, he re-joins Monty’s personal staff where he serves from before D-Day and for most of the North West Europe campaign. His account of the desperate Battle of the Bulge is particularly revealing.

This exceptional wartime memoir is studded with legendary characters. The unique combination of behind enemy lines action and personal insights into how the war was conducted at the highest command level makes for utterly compulsive reading.