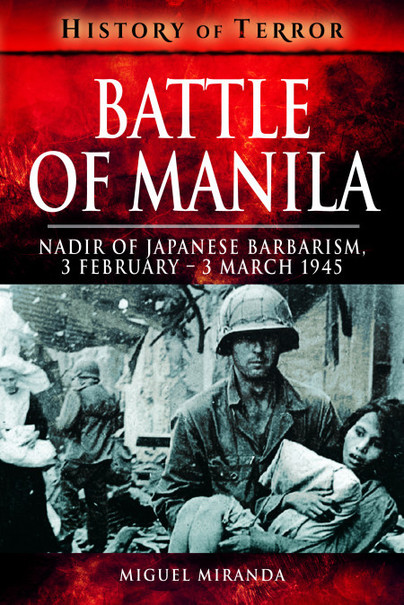 Click here for help on how to download our eBooks
Add to Basket
Add to Wishlist
You'll be £4.99 closer to your next £10.00 credit when you purchase Battle of Manila. What's this?
Need a currency converter? Check XE.com for live rates

Nearly four years of brutal Japanese occupation in WW2 has dimmed Manila’s lustre. The Philippine capital, surrounding an old Spanish fortress, was once a glittering jewel among America’s overseas possessions. And now a vast Allied army led by the indomitable MacArthur is ready to take it back from the Japanese. It is a necessary mission and an urgent one for trapped within the old University of Santo Tomas are thousands of ailing prisoners: men and women, young and old, at risk of torture and death by their captors.

But the token Japanese garrison has other ideas as desperate units of the Japanese navy dig in to fight to the death against the advancing Americans. Caught in this cruel vice are thousands of Filipinos still trapped in the metropolis, with no hope of escape. From the closing days of January until early March 1945, Manila is to endure the most bitter fighting in the Pacific theatre, leaving it a charred wasteland littered with the bodies of the dead, soldier and civilian alike, the latter deliberately targeted by Japanese death squads. Such is the carnage and conquest of Manila.

This is an excellent account of one of the largest land battles of the Pacific War, but one that rarely gets the attention it deserves.

I must admit that while the book is very well written, and easy to read, it is also a very disturbing work, but one that should be read.

The narration of the events is very fluid and detailed... Thus the book is an excellent account of terrible past events, but also a reflection on possible and hopefully hypothetical, future events.

The events and conditions exposed by this review does not make easy reading but it is important to understand what happened. - Highly Recommended

This gem of book is excellently produced by an author whose family were caught in these battles, the campaigns of both belligerents are clearly and concisely presented. After reading this book you wont need to buy another, all you need to know is here.

Miguel Miranda, formerly a regional reporter, is an author from the Philippines and writes for several Pen & Sword military history series including ‘Cold War 1945–1991’ and ‘History of Terror’. Writing about the battle of Manila has been an opportunity for him to confront a very dark period in Philippine history, one that is still misunderstood today. To amass the wealth of research and insight for his latest work he pored over volumes of official histories and archives, assembling a detailed narrative on the topic.

Not only did the battle of Manila liberate the Philippines from cruel foreign domination but it set the stage for total independence in 1946. It bookended the American colonial period (1899–1945) and closed a chapter in a long saga of conflict and struggle that has visited his homeland again and again. As a country whose history is shaped by the designs of various empires, the battle of Manila showed how vital the Philippines is to the region, the gateway to the Asian landmass and the rampart of grand strategy for a would-be superpower. As it was then, as it is today.