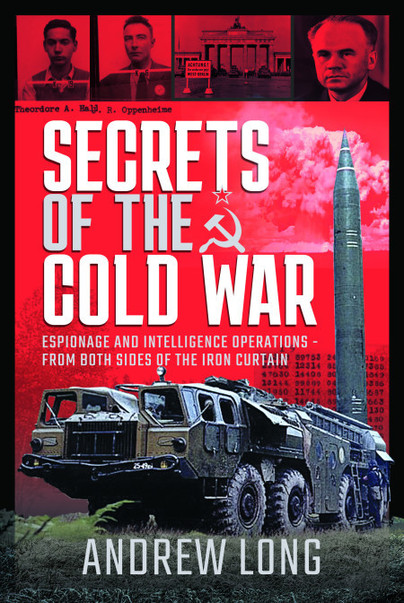 Secrets of the Cold War (Hardback)

Espionage and Intelligence Operations - From Both Sides of the Iron Curtain

Preorder
Add to Wishlist
You'll be £20.00 closer to your next £10.00 credit when you purchase Secrets of the Cold War. What's this?
+£4.50 UK Delivery or free UK delivery if order is over £40
(click here for international delivery rates)

The Cold War, which lasted from the end of the Second World War to the collapse of the Soviet Union in 1991, was fought mostly in the shadows, with the superpowers manoeuvring for strategic advantage in an anticipated global armed confrontation that thankfully never happened.

How did the intelligence organisations of the major world powers go about their work? What advantages were they looking for? Did they succeed?

By examining some of the famous, infamous, or lesser-known intelligence operations from both sides of the Iron Curtain, this book explains how the superpowers went about gathering intelligence on each other, examines the type of information they were looking for, what they did with it, and how it enabled them to stay one step ahead of the opposition. Possession of these secrets threatened a Third World War, but also helped keep the peace for more than four decades.

With access to previously unreleased material, the author explores how the intelligence organisations, both civilian and military, took advantage of rapid developments in technology, and how they adapted to the changing threat. The book describes the epic scale of some of these operations, the surprising connections between them, and how they contributed to a complex multi-layered intelligence jigsaw which drove decision making at the highest level.

On top of all the tradecraft, gadgets and ‘cloak and dagger’, the book also looks at the human side of espionage: their ideologies and motivations, the winners and losers, and the immense courage and frequent betrayal of those whose lives were touched by the Secrets of the Cold War.

Andrew Long is a Cold War historian and author. His fascination with the Cold War began with a trip to East Berlin in 1986, travelling through the famous Checkpoint CHARLIE. Andrew's writing comes from a desire to make sense of an extremely complex period in modern history, weaving together inter-relating stories involving politics, ideologies, personalities, intelligence, technological advances, and geography. There is still much to be told on this fascinating subject. After a successful career in marketing, Andrew relocated to Cornwall and took up writing full time. This is Andrew’s fourth book, with the first three volumes of a miniseries on Cold War Berlin published by Helion & Company in 2021/22.