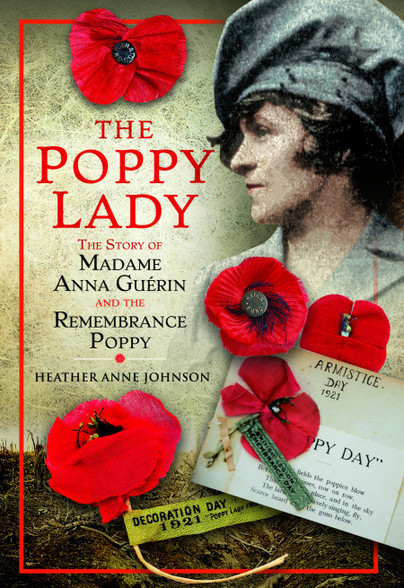 The Story of Madame Anna Guérin and the Remembrance Poppy

Preorder
Add to Wishlist
You'll be £16.00 closer to your next £10.00 credit when you purchase The Poppy Lady. What's this?
+£4.50 UK Delivery or free UK delivery if order is over £40
(click here for international delivery rates)

Madame Anna Guérin is the fascinating personality behind the title ‘The Poppy Lady’. Her idea of the ‘Inter-Allied Poppy Day’ gave work to women and children in the devastated areas of France, in addition to offering support for First World War veterans.

Born in 1878, she was an early feminist, becoming financially independent. During the First World War, and the immediate years after the Armistice, many people knew of Madame Guérin’s reputation as a selfless fundraiser for French and American charities. Her speeches inspired many people to make generous donations.

Having had her name lost in the mists of time, this is the first biography of Madame E. Guérin. The book follows her extraordinary story as ‘The Poppy Lady’, a woman born before her time, but confined to anonymity for too long.

HEATHER JOHNSON has an interest in local and inter/national history. She researches her own genealogy and enjoys enlightening others to theirs. Since 2013, she has researched the British WW1 Home Hospitals set up close to her East Anglia home. Skills honed in these endeavours proved invaluable when a proud Canadian, Nancy MacFarlane, asked “who put the poppy on your lapel?” She identified “The Poppy Lady of France” and it is Heather’s mission to bring her out of the shadows.