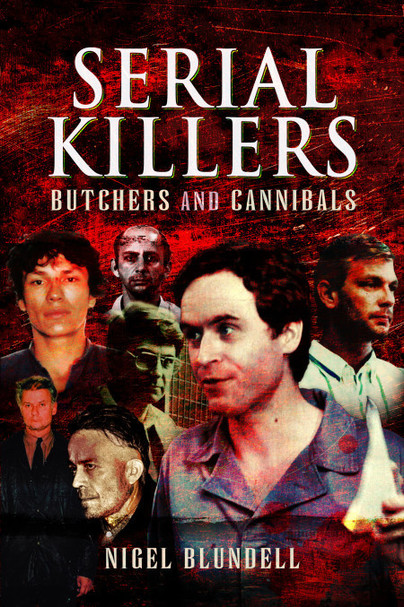 Signed copy available – request a signature plate at the checkout
Add to Basket
You'll be £10.39 closer to your next £10.00 credit when you purchase Serial Killers: Butchers and Cannibals. What's this?
+£4 UK Delivery or free UK delivery if order is over £30
(click here for international delivery rates)

Mass murder is awful enough. But some serial killers not only embark on slaying to slake their perverted pleasures but enjoy the mutilation of their victims bodies and sometimes also revert to cannibalism.

The simple act of slaying would sicken most people. Yet that is not sufficient a thrill for those who find the excitement begins once their victims are dead. Cutting up corpses is, of course, one way of disposing of the evidence. But here we examine the butchers who dismember for pleasure.

They are monsters like Andrei Chikatilo, the so-called Rostov Ripper, who tortured, murdered, chopped up and sometimes cannibalised as many as 50 victims. Or they can be quite unassuming perverts like Dennis Nilsen, whose London house of horrors so overflowed with body parts that they blocked the drains.

There is nothing new about this, the sickest side of homicide, of course. The most famous serial killer of all was Jack the Ripper and butchering maniacs have been slashing their bloody path through history ever since.

‘Because the price of meat in the shops is so expensive’ he replied. By the way of explanation, he told the detectives that he only consumed the flesh of those victims who were young and tender.’

Well what a gruesome book that was! Each chapter was a different story some who are well know and that I have read about before and a whole heap that I was not aware of.

The book is easy to read and follow along with although at times the book is extremely gory - after all it is about the most notorious serial killers who dismembered and took pleasure in eating their victims.

I found it so interesting that majority of the man and women in the stories had served time in the army, continued to kill people due to police mistakes in trying to investigate and capture them and that a lot of them died in prison of heart conditions. So many commonalities between the cases.

Overall, the book was an interesting read and if you are interested in serial killers this one is for you.

I remember reading this book Serial Killers: Butchers and Cannibals when I was younger and when I saw Nigel Blundell has re-released I thought I would like to read it again as it was great read for any true crime fan. I enjoyed reading it again.

If you are a fan of true crime, this one is for you.

This book is a great read for any true crime fan. The author did a great job of including those killers that most of us have heard about, but also included several that I hadn't heard of. I found the writing to be engaging, as I finished this in a day.

This was really well done! The research was thorough and accurate as far as I could tell.
This book isn't for the faint of heart, but the title alone should tell you that. The killers in this one are the worst of the worst.

I will admit that Serial Killers fascinate me and I love being able to catch a glimpse inside their minds to see what makes them tick, what drove them to commit the crimes they did and whether they were born with it, suffered an early trauma or just turned downright evil.

I loved the layout for this book, the chapter length was great – plenty of detail and just long enough to speak an interest to enable you to read further around some of those mentioned. I have read other books by this author and he has a great writing style, it is easy to read (even though some of the crimes this lot committed aren’t easy to read about) and it has a great natural flow to it and you can easily dip in and out of the book.

It is 5 stars from me for this one – very highly recommended – I thought that it was a great read!!

Those with an interest in true crime - and indeed, those who have watched the TV series Mindhunters - will have heard of at least some of the serial killers featured in this book. Jeffrey Dahmer, Ed Gein, Andrei Chikatilo, Dennis Nilsen, Richard Ramirez, Jack the Ripper and Elizabeth Bàthory are names of which most are aware. There are plenty of others here I hadn’t heard of, though, including Fritz Haarman, Gilles de Rais, Joachim Kroll, Adolfo Costanzo and Anatoly Onoprienko. While by no means an exhaustive list of serial killers, nor confined to only the most prolific, what the murderers in this collection have in common is their bloodlust. They all took sick, depraved pleasure in butchery, many of them descending to cannibalism.

If you plan to read this, make sure you have a strong stomach and don’t read while trying to eat. While the accounts don’t dwell pruriently on the gory details, neither do they shy away from revealing the nauseating truth of these appalling crimes. I read quite a bit of true crime and consider myself pretty inured to it, but due to the fairly condensed nature of these accounts, there’s an awful lot packed into this book. With 28 killers’ crimes described, the victims number not in the hundreds, but the thousands, and the crimes are among the most revolting ever recorded. It’s a confronting read, to say the least.

This spine chilling book immediately delves into the worlds and minds of some of the most well known and sickest murders and cannibals in our world from the very first page. All of the information that is presented in the book is in depth and will make the reader check their windows before they go to bed after reading this because of the details of how these crimes were committed and by whom. The information in this book , however, will also keep you gripped until the very last page due to the fact that it tells you all about the crimes from how they did it, who they killed and even who/who they think was the murderer, such as the case of Jack The Ripper who police suspected was Robert Mann. People who enjoy a murder mystery will enjoy this interesting book so that they can see for themselves who were the victims, who was the murderer, what happened and what was in the mind of the killer or cannibal who committed the crime. This book is an intriguing read and will not let you down once you've finished it.

From the author of its accompanying volume Serial Killers: The World's Most Evil comes this equally, if not more, disturbing collation of those most evil murderous maniacs whose twisted spin on 'fun' begins only after the death of their unsuspecting victims. Multiple murderers, butchering, mutilation and cannibalisation all rear their horrifying heads in this; the sickest side of murder most foul. Featuring the likes of Jack the Ripper - the most famous serial killer of all - this book is a 'dare to delve' among many of its predecessors of the true crime world... certainly not one for the faint-hearted, but a real page-turner if you're into examining what is behind the psychology of the world's most monstrous.