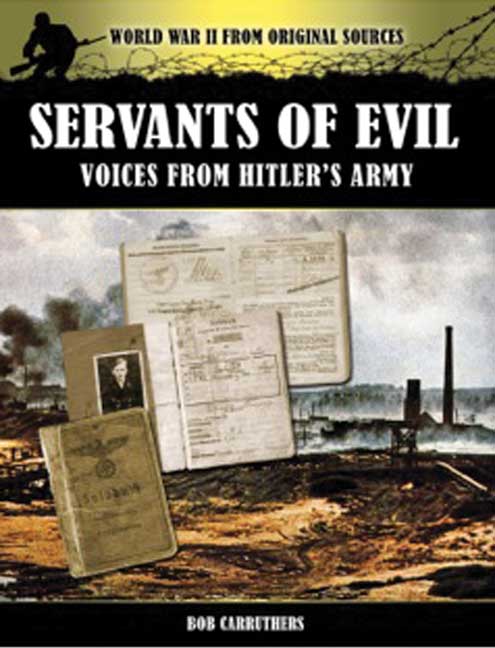 Add to Basket
Add to Wishlist
You'll be £12.99 closer to your next £10.00 credit when you purchase Servants of Evil: Voices from Hitler's Army. What's this?
+£4.50 UK Delivery or free UK delivery if order is over £35
(click here for international delivery rates)

History is always written by the victors. . . this is the other side of the coin. This is the front line perspective on World War II as seen through the eyes of the losing side, the men who fought for Hitler.

These are the recollections of the men of the Kriegsmarine, the Luftwaffe and the Heer. Altogether they formed the Wehrmacht which in 1940 was the most efficient fighting force the world had ever seen. By 1942 the tide had begun to turn and the men of the once mighty Wehrmacht fought in vain at Stalingrad, El Alamein, Monte Cassino, Caen and Berlin. These are the U-boat men, the Panzer crews and the air aces. This is military history at its best and most enlightening as told from primary sources.

Written by Emmy award winning author Bob Carruthers, this unique publication documents the primary accounts of many of those who fought in Hitler's army.

These fascinating first hand accounts, sometimes moving, more often horrifying, give us a fresh, German, perspective on the war and the men who fought it.

There has never been any shortage of first hand accounts to lavishly document every aspect of the Second World War from the Allied perspective, but accounts by their German counterparts are often conspicuous by their absence. Bob Carruthers presents a number of fascinating stories in his book which, helped along by his own lively narrative, gives us a taste of life on the opposite side of the line. No history can be complete without considering events from all perspectives, and Servants of Evil is a fine start towards addressing the imbalance.