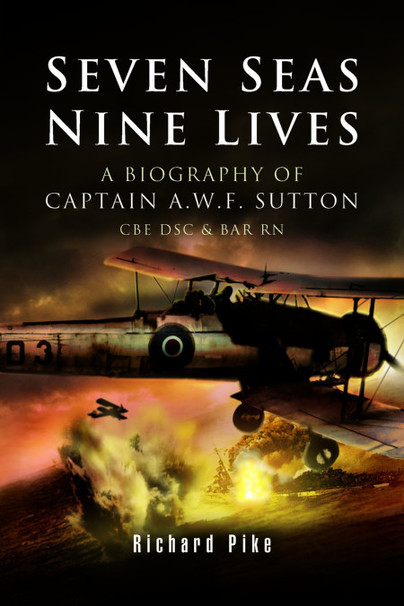 Add to Basket
Add to Wishlist
You'll be £10.49 closer to your next £10.00 credit when you purchase Seven Seas, Nine Lives. What's this?
+£4.50 UK Delivery or free UK delivery if order is over £35
(click here for international delivery rates)

Captain Alan William Frank Sutton's enthralling biography starts when, as a young midshipman he was in command of a small picket boat returning a potentially mutinous crew to the battle-cruiser HMS Repulse on which he served. The book builds to an amazing and exciting climax which ends in the open cockpit of a Fairey Swordfish torpedo bomber during the legendary attack on the Italian fleet at Taranto in November 1940. The Littorio sees us: she opens fire. The flashes of her close-range weapons stab at us. First one, then others - everything opens up along her whole length. We're coming in on her beam; we're in a terrible mass of cross-fire-cruisers, battleships, shore batteries, the lot. The bloody Italians are firing everything apart from major armament. But we're low, too low for the enemy gun-aimers. The place stinks of cordite and incendiaries and burning sulphur. Everywhere is wreathed in smoke - thick, choking, foul stuff. This biography has been written with the full cooperation of Captain Sutton who has given the author fascinating insight into a career of remarkable courage and diversity.

Sutton’s observations on everything from the politics of the Spanish civil war to the social barriers in the wardroom are fascinating. The account of the turmoil caused by insensitive handling of the Invergordon mutiny and its subsequent impact on Sutton personally and the Navy’s approach to divisional matters are a good insight into contemporary naval life. There are also some good photos from Sutton’s own albums. I enjoyed the book.

Richard Pike served with the RAF as a fighter pilot and then flew helicopters as a civilian. Now retired from flying professionally he has previously written Beaufighter Ace, the biography of his father's (Marshal of the Royal Air Force Sir Thomas Pike) World War II flying career.