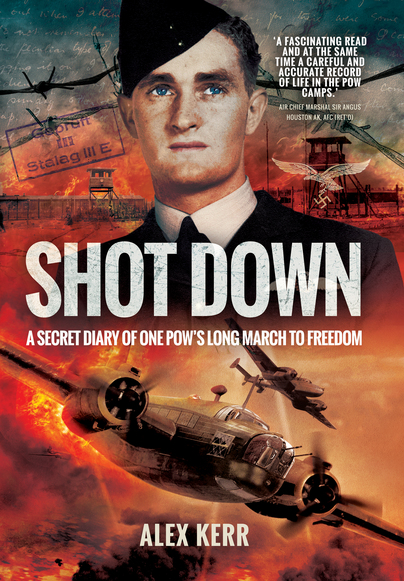 The Secret Diary of One POW’s Long March to Freedom

Click here for help on how to download our eBooks
Add to Basket
Add to Wishlist
You'll be £4.99 closer to your next £10.00 credit when you purchase Shot Down. What's this?
Need a currency converter? Check XE.com for live rates

Alex Kerr's Wellington, a twin-engine bomber, was shot down over Germany in 1941. At first hospitalised with hopes of repatriation, he unexpectedly found himself a prisoner in a German POW camp. Throughout those trying four years he was held captive, Alex kept a secret diary. This book reproduces his diary entries in a fascinating account of all aspects of life in a wartime prison.

He describes being part of the infamous ‘Long March’ during which he and his comrades were strafed by Allied aircraft; 60 POWs were killed and 100 wounded. Alex escaped the march with a mate, passing through the front lines between the British and German forces to commandeer a German mayor’s car and drive back to Brussels to take the next aircraft to freedom.

Alex’s charm and optimistic outlook will buoy the reader throughout, and the camaraderie between he and his captive comrades is always entertaining. This is an authentic Second World War adventure — from being shot out of the sky, to incarceration and the ultimate triumph of escape and the end of the war.

"Shot Down is also an incredibly rich life story that even offers a gentle lesson in making the most of difficult circumstances. It is also a significant addition to Australian military, aviation, and prisoner of war history. Uplifting. Read it."

An authentic World War Two memoir - from being shot out of the sky, to incarceration and the ultimate triumph of escape.

Based on a secret diary maintained during four years of imprisonment, this is an authentic voice from WWII. The author demonstrates charm
and optimism which lightens what might have been a depressing story. Recommended.

During his time as a prisoner, Alex Kerr was involved in three escape attempts, one of which included the construction of a ‘record breaking’ tunnel. He succeeded on his third attempt.

After his escape Alex returned to the United Kingdom, before embarking for Australia in August 1945, and arriving in Sydney the following month. Returning to civilian life, Alex married and had five children. He pursued an academic career, ultimately becoming a Professor and Deputy Vice Chancellor of Murdoch University in Western Australia. Alex is a member of the RSL.