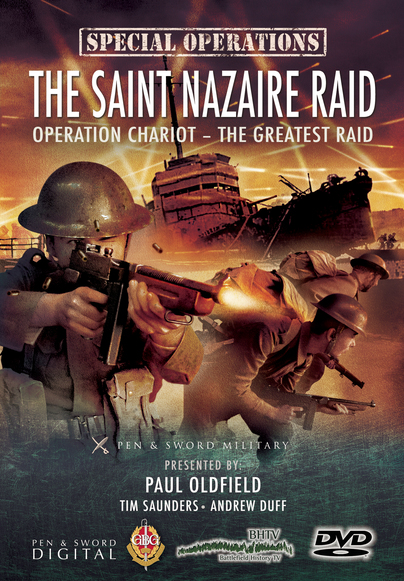 Add to Basket
Add to Wishlist
You'll be £16.99 closer to your next £10.00 credit when you purchase Special Operations: The Saint Nazaire Raid. What's this?
+£4.50 UK Delivery or free UK delivery if order is over £35
(click here for international delivery rates)

Building on the success of various Commando Raids during 1941, Headquarters Combined Operations moved up the scale of size and complexity by electing to attack and deny the only dry dock that could take a German battleship for repairs, the Normandie Dock at St Nazaire on France's Atlantic coast. The problem was that the port was miles up an estuary that was well defended by the Germans. To deliver an explosive charge big enough to demolish the massive lock gates, an old ship HMS Campbeltown was converted to look like a German destroyer, so as to bluff their way into the heart of the port. With Campbeltown ramming the lock gates the Army Commandos were to fan out across the dock to demolish pumps and winding gear to comprehensively deny the dock to the Kriegsmarine for a significant period of time. Under cover of dark the bluff worked well – up to a point – Campbeltown rammed the gates but the Commandos found that the Germans were alert and had great difficulty in reaching their objectives.

Shot on location in the usual BHTV style of expert commentary from naval and commando historians. During shooting the team secured unrivaled access to parts of the harbour and pumping houses that simply can not be seen by normal visitors to St Nazaire. These great location shots are complimented by testimony from the surviving veterans, detailed maps, essential for proper understanding of the raid, and some illustrative re-enactment.

The whole film gets under the skin of the Raid in a manner and depth that others have tried; it is altogether an excellent addition to the Special Operations series.

Great location shots are complimented by testimony from the surviving veterans, detailed maps and some illustrative re-enactment.