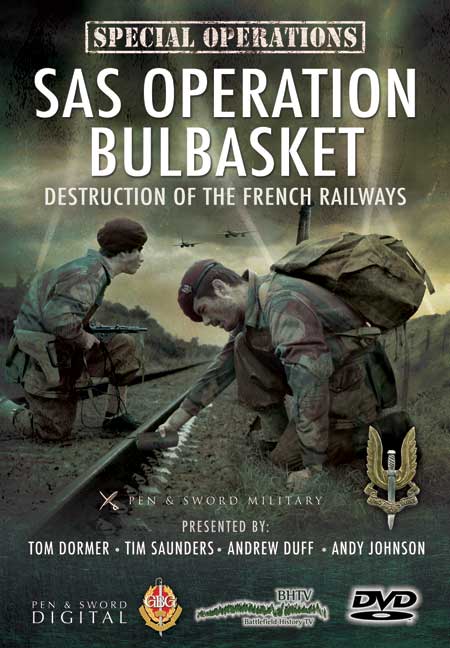 Part 2: Destruction of the French Railways

Add to Basket
Add to Wishlist
You'll be £12.99 closer to your next £10.00 credit when you purchase Special Operations: SAS Operation Bulbasket. What's this?
+£4.50 UK Delivery or free UK delivery if order is over £35
(click here for international delivery rates)

Continuing the story of Operation Bulbasket the Battlefield History TV team of soldier historians follow the development of the attacks on the railways in order to delay the arrival of crucial German re-enforcements in Normandy. They find the clandestine drop zones where the main body and for the first time jeeps dropped, look at the targets (railway bridges and junctions) and camps deep in isolated forests, before examining how it all started to unravel.

Following the information from the torture cells of the Gestapo headquarters in Poitiers to the barracks of the SS training battalion who were to attack the SAS, the film details the German cordon and search tactics used in the Verrieres Camp Raid. The majority of the SAS were captured by the SS and the Resistance fighters with them were summarily executed. After interrogation and buck passing 'Hitler's Kommando Order' to execute all Allied commandos was finally carried out in the depths of a remote wood.

But the operation went on Captain Tonkin and the surviving officers and men of the SAS carried out regular and increasingly risky attacks on the railways, having been joined by shot down US airment. Together they forced the Germans to tie up increasing numbers of men guarding the lines if they were to avoid total logistic paralysis on the routes north to Normandy. A few brave men had an impact on the liberation of France out of all proportion to their number.

Finally, orders were received in early August for their extraction and the BHTV team look at the preparation of the landing strip and the risky night landing of RAF and USAAF aircraft to take them home.

This excellent DVD is part of the growing Special Operations collection ... Location filming and another crisp production of well-lit footage has produced an enjoyable and absorbing account of one of the great European battles.