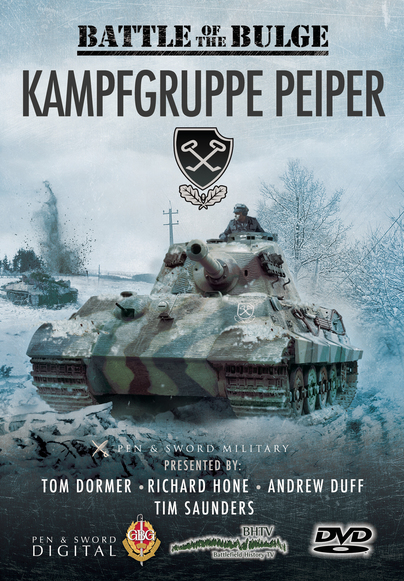 Add to Basket
Add to Wishlist
You'll be £11.89 closer to your next £10.00 credit when you purchase Battle of the Bulge: Kampfgruppe Peiper. What's this?
+£4.50 UK Delivery or free UK delivery if order is over £35
(click here for international delivery rates)

Sepp Dietrich's Sixth SS Panzer Armee was allocated the main effort in Hitler's last throw of the dice in the West. Under cover of poor winter weather that would ground the Allied air forces they were to punch through weak American positions in the Ardennes to the River Meuse and on to Antwerp cutting off and destroying the northern Allied Armies. The German generals protested that it was too ambitious but Hitler insisted, hoping that his elite SS troops in the Leibstandarte Panzer Division would deliver a war changing victory.

From the outset the King Tigers of December 1944, in poor winter weather, could not cut through the forest roads as the smaller Panzers had done in 1940 but were slowed down by determined resistance by small groups of American GIs, Obersturmbannfuhrer Jochan Peiper, commander of the elite spearhead, the Leibstandarte's 1st Panzer Regiment advancing west on one of the Division's three rolbhans became increasingly frustrated by enemy resistance and poor roads. Eventually anger boiled over into atrocity and the murder of US soldiers at Malmendy and elsewhere along the route. Experienced soldiers, historians and film makers analyse events on the very ground where they happened, stripping away legend and obfuscation of all kinds to present the facts for the viewer to make their own decision on.

Critically short of fuel and missing the capture of vital supplies by only a few hundred yards, the advance of Kampfgruppe Peiper continued to the west against the rapidly recovering Americans . The engineers in particular blew bridges over streams and rivers in the tight Ardennes valleys at every turn. Eventually a combination of a lack of fuel and enemy resistance brought Kampfgruppe Peiper to a halt at La Gleize where they fought a defensive battle until forced to break out on foot abandoning their tanks.

This is a controversial subject but one that the experience BHTV team have been able to bring to life by covering both the German and US perspectives with a frankness that is underpinned by a detailed knowledge and understanding of the battle and its place in the campaign.

Another outstanding documentary from the Battlefield History TV team, following the efforts in the last days of 1944 by Jochen Peiper's 1st Panzer Regiment of the 1st " Leibstandarte" SS Panzer Division, to break through the Allied lines in the northern sector of the Ardennes. The excellently informed historians first describe the state of this much reconstituted, fully staffed but in materiel understrength Division, and with the assistance of maps, photographs, archive footage and re-enactors, vividly bring to life the story of their advance. By walking the ground and describing the key phases, they reveal how the Leibstandarte attempted to make rapid progress but were continually hampered by poor roads, blown bridges, and ever stiffening resistance, and show how this frustration culminated in the Malmedy Massacre where almost one hundred American prisoners of war were murdered. The main focus of the narrative, however, is concerned with the Division's spearhead and their constant struggle to maintain the momentum of the advance until brought to a halt by insurmountable opposition and a shortage of fuel. With the offensive at an end, Peiper and his men abandoned their tanks and smuggled themselves through the American lines to rejoin the rest of the Division.