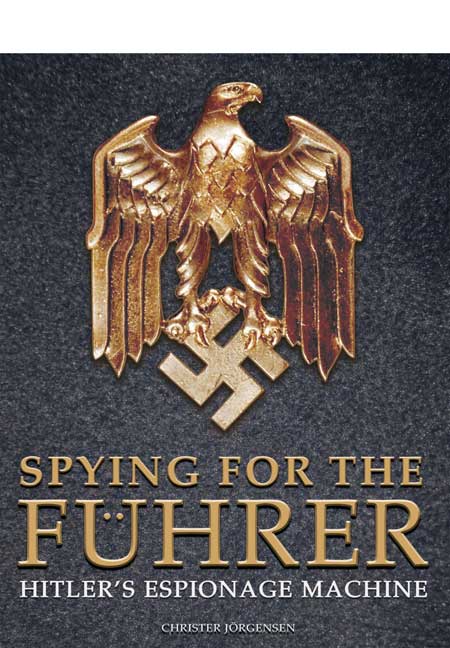 Spying for the Führer (Hardback)

Add to Basket
Add to Wishlist
You'll be £19.99 closer to your next £10.00 credit when you purchase Spying for the Führer. What's this?
+£4.50 UK Delivery or free UK delivery if order is over £35
(click here for international delivery rates)

Spying for the Fuhrer is the story of German intelligence agencies leading up to and during World War II. From the fledgling beginnings of the Nazi SA, or Stormtroopers, grew an espionage machine to rival any in the world. The words SD, Abwehr and Gestapo are some of the most evocative words associated with the war, and all these were German intelligence units. Tasked with suppressing internal unrest, planting agents abroad to gather intelligence or sabotage, the Third Reich's espionage machinery had a long reach. Spying for the Fuhrer is a detailed examination of all the varied facets of the Nazi intelligence apparatus, ranging from the dreaded Gestapo,the daring Brandenburg battalions through to the SD under the Central Security Service of the Reich. The book examines the history of each unit, its formation, the missions, and its importance in the war as a whole. It also explores the nature of the myths and mysteries that have grown up around the German intelligence agencies, with rumours of their activities still rife over 60 years after the defeat of the Third Reich. Similarly, it explores the rivalry rife throughout the intelligence community, and analyzes the effect that this had in damaging Germany's intelligence, especially the rivalry between Canaris, head of the Abwehr, and the SS intelligence service.

This is an excellent study of a key element of the German war effort during the Second World War, providing a good overview of the entire German intelligence effort. As a result we see more of the German successes than is often the case, and get a better idea of the scale of the German effort and how the competing agencies damaged their own side.