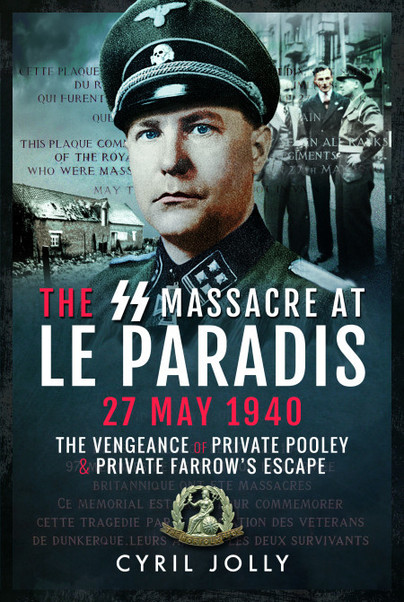 On 27 May 1940, in the hamlet of Le Paradis, in northern France, almost a hundred soldiers of the Royal Norfolk Regiment were murdered. After a resolute defence of their positions whilst part of the rearguard that was protecting the retreat to the Dunkirk beaches, these soldiers, who had surrendered, were disarmed, marched as a body to a field and massacred by member of the SS Division that they had been fighting. However, two men survived: William O'Callaghan and Albert Pooley.

Pooley in particular, was badly wounded and endured a tortuous couple of years as a sick PoW before he was repatriated in the spring of 1943, a clear indicator of his feeble physical condition. He reported the massacre on his return to the UK but was not, it seemed, believed. It was only after the war, despite continued ill health, and a return to le Paradis, that his story was taken up and a proper investigation was launched.

In 1948 the officer responsible for the atrocity, an SS officer, Fritz Knoechlein, was tried in Hamburg, found guilty and executed.

This edition of Cyril Jolly's account of Albert Pooley's story includes a new introduction by Nigel Cave and many new photographs. To follow the fateful trail of these men in the flat, rather uninspiring, country around Le Paradis; and to stand in the small Commonwealth War Graves Commission cemetery where those so cruelly treated lie, is a sobering and moving experience. It is fortunate that Private Pooley survived, showed such extraordinary courage in his determination to get justice for his comrades; and that Cyril Jolly wrote such a gripping, if horrific, account of one of several massacres that took place during the traumatic weeks that led to the Dunkirk Evacuation.

Cyril Jolly served in the Second World War in the RAF. from 1939 - he was evacuated from France in June 1940 and went on to work as a personal clerk to señor RAF officers in the following war time years.

He settled in East Anglia and wrote books on a range of subjects.