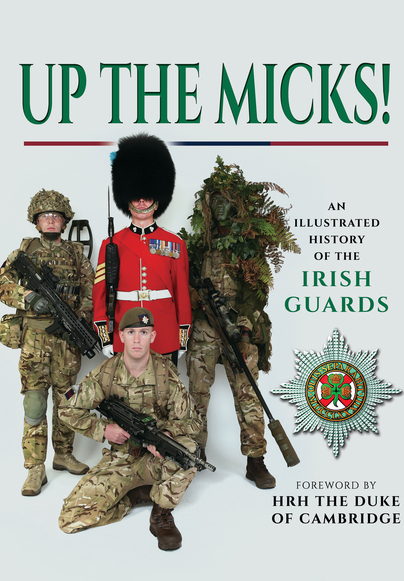 Up the Micks! (ePub)

An Illustrated History of the Irish Guards

To redeem the discount advertised as the ‘Irish Guards Early Bird Offer’, please enter the charity number quoted on your leaflet in the voucher code box on the checkout page.

Offer only applies to hardback version.

You'll be £4.99 closer to your next £10.00 credit when you purchase Up the Micks!. What's this?
Need a currency converter? Check XE.com for live rates

The unique history of The Micks – the Irish Guards – is chronicled in over 1000 images, starting with their formation in 1900 and taking the reader through to the recent war in Afghanistan. It is the story of a remarkable family regiment that continues to enhance the values, standards and reputation of the British infantry in an ever-changing world.
The two world wars are covered in detail with dramatic pictures. The First World War – the brick stacks at Cuinchy under fire, where O’Leary won his VC – and the Second World War – the inferno of the transport ship Chobry off the coast of Norway and the first ever German King Tiger tank seen in action brought to a halt by the Irish Guards without firing a shot. More recently, the Micks were involved in internal security duties in Palestine, Cyprus, Malaya, Aden, Northern Ireland and the Balkans. They led the way into Iraq in the Second Gulf War and shed blood in Afghanistan.
The book shows the development of regimental soldiering from the rigidity of the Victorian era, through the horrors of the trenches to armoured warfare in Europe and light infantry soldiering worldwide – all the time upholding the finest traditions of the Foot Guards. In an army that prides itself on the strength of the regimental system, the Irish Guards have created a distinctive and enduring ethos of their own.
This is not just a cold regimental history but has been compiled to show the Micks’ ability to find humour even in the most adverse conditions while demonstrating excellence at both operational and ceremonial soldiering. It also contains, in an extensive set of appendices, a remarkable record of facts about the regiment – the people, places and events in the history of the Irish Guards – which will serve as an invaluable source of information for future generations.

Highlighting both ceremonial and operational soldiering, this color-illustrated
coffee table book offers a history of the Irish Guards, from 1900 through the
two world wars and into current activities, such as their role in the war in
Afghanistan. About 75 pages of appendices offer data on medals, honors, flags,
decorations, leaders, musical bands and directors, locations, and the Irish
Guards wolfhounds. The book contains a wealth of color historical and
contemporary photos, illustrations, newspaper clippings, and political
cartoons.

Up the Micks! has recently been updated and republished. Back in 2000 a team led by Colonel Sir William Mahon Bt were responsible for producing a highly successful centenary book covering the story so far. This latest book draws heavily on the first edition with two new chapters and extremely comprehensive appendices which provide details of key personnel who have served with the Micks since 1990, including all the Wolfhounds from Brian Boru to Domhnall.

This book is rather like a splendid regimental scrapbook, augmented by an excellent narrative, a huge number of photographs, detailed captions, and maps. By its nature it will be enjoyed particularly by past and present members of the Irish Guards and their families, but it also has a wider appeal. This beautifully produced book encapsulates the special qualities of a regiment in all its many forms. We see soldiers at war, on the drill square, on state ceremonial and with member of the Royal Family, on exercises, and in many other familiar guises. The last 15 years since the centenary are also well covered, with the Irish Guards on operation in Iraq and Afghanistan and taking part in the wedding of The Colonel of the Regiment, HRH The Duke of Cambridge. Since this edition ends in 2015, we can be confident that the book will be updated again in the future. An excellent record of a regiment.

This is truly a hefty, large format, beautifully presented, sumptuous book of over 350 pages which relates, with numerous illustrations, the story of the Irish Guards from their formation in 1900 through to the present day. There is a Foreword by His Royal Highness the Duke of Cambridge, Colonel, Irish Guards, followed by an Introduction from Major General Carleton-Smith CBE, Regimental Lieutenant Colonel, Irish Guards.

The story of the Regiment is then covered in nine chapters, to be followed by 18 Appendices, covering such topics as Irish Guards Victoria Crosses, Colonels of the Regiment, 1st Battalion Locations and Irish Guards Wolfhounds. There are literally hundreds of illustrations, in colour and monochrome, both paintings and photographs showing the Regiment at work and play. As the Colonel of the Regiment notes in his Foreword, this book captures the essence of what it is to be an Irish Guardsman. It is a superb historical record of a fighting regiment; the team that have produced this book certainly know their stuff and are to be applauded. A quite magnificent work.

There is so much to absorb in this quite superb book. My comments above only scratch the surface and I will be returning to study favourite photographs and also to find others that I missed first time around. The appendices are magnificently detailed and include the Regiment’s honours, colours, Victoria Cross recipients, casualty numbers, Colonels of the Regiment and so on.

The book is a credit to the compilers, an education for readers and a monumental tribute to the Irish Guards. The contents will enlighten and amuse, amaze and inspire, and will also explain, via a huge variety of illustrations, the wide range of work that is done by the Irish Guards and other regiments - war and peacekeeping duties as well as ceremonial involvement.


Up The Micks! is a fine salute to the Irish Guards.

This is not just a photo album, make no mistake ... we are facing a hard living history. Depending on the person, the moment and the mood with which one finds oneself while turning pages with your fingers, the connotations we receive may be totally different and varied for one or the other.

A curious and interesting reading and viewing which from the first page book, automatically takes you on a journey in time where the limits only puts your imagination.

A superb pictorial history of the Irish Guards which begins with the regiment's formation in 1900 and brings the reader right up to the present day. I would have liked to have seen sources cited on more of the illustrations and photos, and it is unfortunate that the date of the regiment's first presentation of the colours is given as May 2002 rather than May 1902. However, these are minor quibbles and there is much to recommend this book, including useful appendices that detail everything over the years from gallantry awards and the evolving Colours to names of colonels and senior NCOs. This will be a very distracting coffee-table book as well as a quick and easy source of reference. I've only just started dipping into my copy but it's going to sit very comfortably with my other Guards regimental histories and I know it's going to be useful. Grenadiers, Coldstreams and Scots, take note.