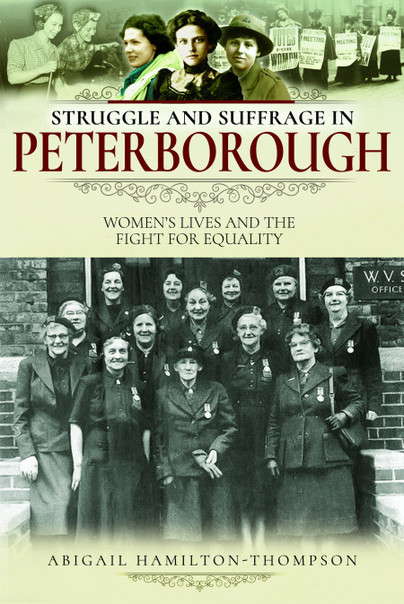 Struggle and Suffrage in Peterborough (Paperback)

Preorder
Add to Wishlist
You'll be £10.39 closer to your next £10.00 credit when you purchase Struggle and Suffrage in Peterborough. What's this?
+£4.50 UK Delivery or free UK delivery if order is over £35
(click here for international delivery rates)

'Votes for Women. Handle with Care' was the message left on a hoax bomb found under the Oundle railway bridge in 1913, just two years after the leading suffrage campaigner Mrs Pankhurst visited the city.

Notable women of Peterborough include Florence Saunders, a selfless dedicated nurse who regularly visited the poorer areas of Peterborough and set up the District Nursing Health Service at the Soke. Another well known nurse, Edith Cavell, spent some time at the Laurel Court School, which was run by a leading female character.

The Women's United Total Abstinence Council (WUTAC) set up a coffee wagon to encourage male workers to avoid drinking, thus helping families in the war against alcoholism. The WUTAC also set up a tea room at the railway station during the First World War to discourage sailors and soldiers from the public houses.

This book explores the lives of women in Peterborough between 1850 and 1950 by looking at home life, the taking on of men's roles during the First World War, the land army, nursing, the accommodating of evacuees during the Second World war, the eccentric first Freewoman of the city and the first female mayor.

Struggle and Suffrage in Peterborough uncovers the stories of the leading women in the city who helped change women's lives forever.

Abigail Hamilton-Thompson lives in Eastern England and has an extensive interest in the great outdoors and local history. When not busy working on her next project, Abigail is busy researching her own family history.