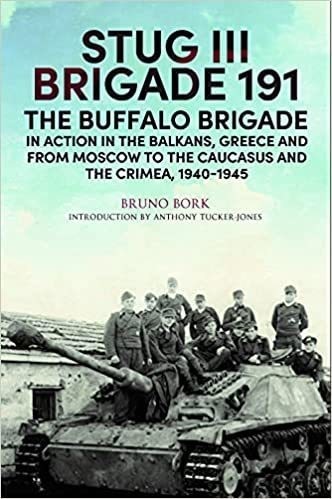 At the end of this superb book are specification details of the StuG weapon carrier as featured.
In summary, a beautifully crafted and very detailed publication with plenty of personal photographs and excellent maps. Highly recommended.

"....upon finishing this book the reader will doubtlessly better realize what a useful and versatile armored fighting vehicle the Sturmgeschütz III really was to the German armed forces."

A fascinating book indeed that tells the story of German troops in the German army serving with Brigade 191. This unit served from as far as the Balkans and Greece to Moscow and Kursk. Through the thoughts and opinions of first-hand accounts of German soldiers this book clearly reveals the harshness of life and conditions serving in this unit and the devastating encounters they faced and endured. We now see more and more of these books detailing the ‘other side’ of the story by giving us the opinions and evidence of the German side, an excellent thing as this can only give us a better and fuller picture of important events. This book is well written by the author Bruno Bork and I must say that the book contains a great number of photographs which I think do the book much credit and appeal. I would happily recommend this book to others, especially those interested in German first-hand accounts.

"Highly Recommended for beginner to advanced builders and historians interested in the StuG actions on the Eastern Front."

"Author Bruno Bork not only offers a tactical unit history, but also another German 'blood and guts' ground-level views of Hitler’s retreats and defeats on the Eastern Front. This is also a truly riveting read."

If like me, you enjoy reading the words of the men who were there, then this is one of those books that you should look into.

I found this telling from a German perspective very interesting.