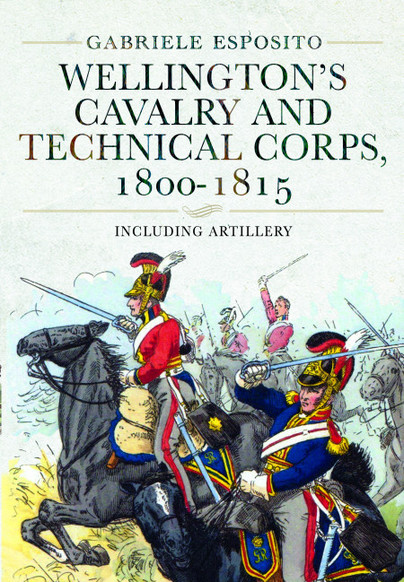 Add to Basket
Add to Wishlist
You'll be £16.00 closer to your next £10.00 credit when you purchase Wellington's Cavalry and Technical Corps, 1800–1815. What's this?
+£4.50 UK Delivery or free UK delivery if order is over £35
(click here for international delivery rates)

While artillery has been described as the queen of the Napoleonic battlefield, this was an era when cavalry could still play a decisive role in battle, as well as being vital on campaign. This volume covers both British cavalry and artillery of the Napoleonic Wars, as well as supporting units such as engineers. Gabriele Esposito describes the history, organization and uniforms of the various units in full detail, following the evolution and combat history of each. Mounted troops deployed in the various British colonies as well as foreign cavalry units in British service will be all covered in specific chapters.

The technical corps, most notably the artillery (both foot and horse) and the engineers, are given similar treatment. Royal Marines naval infantry and some other 'auxiliary' corps (like the Yeomanry/militia cavalry or the Sea Fencibles, all very little known) are also included. The book is lavishly illustrated with dozens of colour paintings.

As with the previous work the illustrations are to a high standard and will be a good source book for artists and military modellers.

The many illustrations showing a range of uniforms of different units are really excellent and the bibliography points the reader to further reading.
Bear in mind that the whole army is the subject and content is not limited to those who came under Wellington’s zone of command. Enjoy a jolly interesting read and put this book into your reference section for dipping into as the need arises or when you just feel like looking at some superb illustrations.
We strongly recommend this book.

The author has established a reputation in a series of books in the Armies of the Past category for delivering concise and well presented technical history and this book continues that pattern. It offers explanations of the various Corps and is very well supported by colour plates, and is a very useful reference.