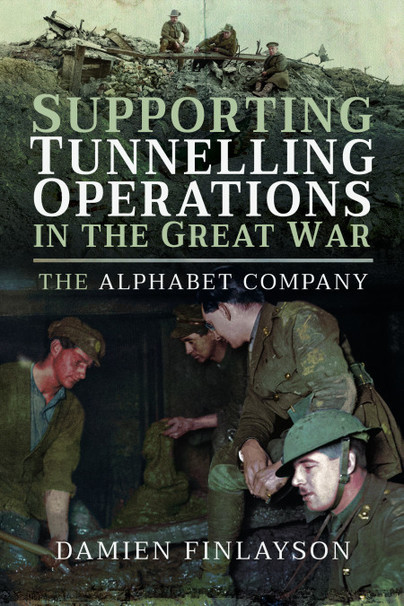 Click here for help on how to download our eBooks
Add to Basket
Add to Wishlist
You'll be £4.99 closer to your next £10.00 credit when you purchase Supporting Tunnelling Operations in the Great War. What's this?
Need a currency converter? Check XE.com for live rates

Few soldiers on the Western Front had heard of the Australian Electrical and Mechanical Mining and Boring Company, even after it had been renamed the ‘Alphabet Company’ by an AIF wag. Yet many knew the work of this tiny unit which numbered fewer than 300 at full strength. Despite its small size, the Alphabet Company’s influence was enormous and spanned the entire British sector of the Western Front, from the North Sea to the Somme.

This is the story of the ‘Alphabeticals’ who, led by Major Victor Morse, DSO, operated and maintained pumps, generators, ventilation fans, drilling equipment and other ingenious devices in extreme circumstances. Given the horrendous conditions in which the troops lived and fought, this equipment was desperately needed, as were the men who operated it in the same, often nightmarish setting.

This is the first account of the dynamic little unit that was the Alphabet Company, a unit that has been neglected by history for a century. It is the story of the men, their machinery and the extraordinary grit they displayed in performing some of the most difficult tasks in a war noted for the horrific conditions in which it was waged. They do not deserve to be forgotten.

The author tells how they overcame obstacles and fought the enemy in the dark, claustrophobic tunnels. One of their achievements, out of so many, was Hill 60, which is recounted here and makes this book essential reading.

The fascinating story of the small, little known Australian Electrical and Mechanical and Boring Company, hence the nickname the “Alphabet Company”, of the AIF. Less than 300 strong the unit was responsible for operating and maintaining the pumps, generators, ventilation fans and drilling equipment etc in direct support of the tunnelling companies. As such, working in conditions of extreme danger and discomfort, their influence to mining operations from the North Sea to the Somme was incalculable and most unusually they were singled out for praise by name in a Special Order by Haig. Well illustrated with bw maps, plans and photographs The Alphabet Company is a compelling story and highly recommended.

Damien Finlayson is an amateur military historian with a special interest in the First World War. He has worked as a hydrogeologist with a private consulting company for the past twenty years and holds a Bachelor and Master degree in science. Damien is a member of the Western Front Association. His articles on the Australian tunnelling companies have appeared in the association’s journal Stand To! and the journal of the Australian Military Historical Society, Sabretache.