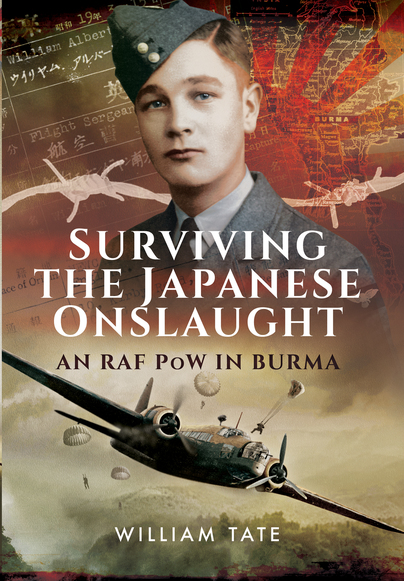 An RAF PoW in Burma

As seen in the Daily Mirror. Read the article via www.mirror.co.uk.

As featured by the Mail Online, click to read the full article online.

You'll be £11.00 closer to your next £10.00 credit when you purchase Surviving the Japanese Onslaught. What's this?
+£4.50 UK Delivery or free UK delivery if order is over £35
(click here for international delivery rates)

These are the first-hand memoirs of the late William Albert Tate (W.O, RAF Bomber Command) framed within the factual history of his service career in the Royal Air Force between the years 1938 and 1946, penned by his son. This gripping narrative relays William's first-hand recollections of his time spent as a Japanese Prisoner of War, when he was incarcerated for two years in Rangoon Gaol, after bailing out of his Wellington over Burma. Tales of the harsh brutalities inflicted by his captors and the unsanitary conditions in which he and his fellow captives were held offer a real sense of the everyday realities experienced by Japanese Prisoners of War at this time. Jungle diseases, enforced starvation, sadistic torture tactics and the ever present threat of aerial bombardment all beset these prisoners. William and his son meditate on the legacies of enduring such trials as these in an engaging account of survival against the odds.

This gripping narrative relays William's first-hand recollections of his time spent as a Japanese Prisoner of War.

The book contains plenty of pictures which make this personal tale all the more vivid.

Reading the academic texts one is unlikely to comprehend the full horrors of war. It is personal accounts like this that bring out so much more. Books like this put ‘flesh on the bones’ so to speak.

Summing up, at only 150 pages, a shorter book than the others I have had recently: however, one that educated me so much.

As featured on British Military History!

In my earlier life, during the first years of my fifty-plus years of gainful employment, I worked with a man who had survived being a POW in Burma. Many of his colleagues urged him to tell his story, but I recognised his need to keep it forever secret, and so it was. It takes a form of extreme courage to set down a memoir of what you went through in those dark days. William Tate's story is extraordinary and terrible. It will fascinate readers, but they can never really appreciate the depths of horror these men and women went through on our behalf.

This new book features the memoirs of the late William
Albert Tate who died in 2007 at the age of 85. The first-hand account
of an RAF aircrew has not previously been published and it adds
further personal insight that is valuable. Essential reading.

William Albert Tate served in Bomber Command from 1938 to 1946. He passed away in 2007, at the age of eighty-five. This is the first time that his memoirs have been published.