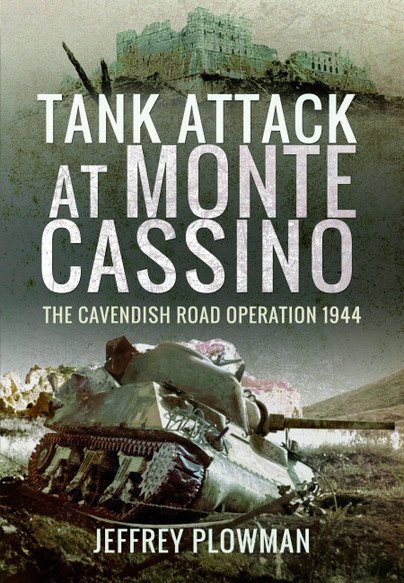 Click here for help on how to download our eBooks
Add to Basket
Add to Wishlist
You'll be £4.99 closer to your next £10.00 credit when you purchase Tank Attack at Monte Cassino. What's this?
Need a currency converter? Check XE.com for live rates

I found this a very readable book, written in a relaxed style which I liked. The mix of the story with the images and the personal accounts works well. The operation itself was not a success, just one of the plans to take Cassino which didn't work, though not down to the bravery of those who tried. There were problems from weather, the obstruction of the route through the town because of allied bombing, and differences of opinion over the plans. I think it is noteworthy for highlighting how the battle included British, New Zealand, US, Indian, Gurkha, Polish and French units in the battle. For those who haven't had the pleasure of visiting Monte Cassino I must encourage you to do so if you can. When you see the view over the Liri valley from the rebuilt monastery today, you instantly appreciate how it dominated the route that led to Rome. A place where my own father fought back in 1944. Next time I'd certainly take this book with me and check out the remains of the Cavendish Road.

If you are fascinated by the Battle for Monte Cassino and/or the experiences of WWII tankers in general, this is a “must read” book.

A great analysis of Operation Cavendish Road against Monte Cassino.

The protracted Battle for Monte Cassino has attracted many historians, but somehow the important Cavendish Road Operation has largely escaped their attention. Monte Cassino and the Italian Campaign has frequently been dismissed as a wast of Allied resources, but it was the third front of WWII, the second being the air war over Europe, and vital to the eventual Allied victory. Within this critical campaign, Monte Cassino formed an important impediment to the Allied advance. – Very Highly Recommended

Jeffrey Plowman has conducted comprehensive and detailed research into the units involved and the operation itself to create a really comprehensive historical record of one little- known operation. An excellent study in both allied operational cooperation on and multiple units bringing different specialists disciplines together to achieve a single objective.

The book is heavily illustrated with a wide range of contemporary photos, some excellent maps and a guide to exploring the battlefield as it is now. There are a comprehensive range of appendices providing details of everything from the vehicles used in the armoured assault to gallantry award citations for New Zealand, US and Polish troops received for gallantry in the action.

The Cavendish Road operation is little known today, but it is one of the ‘what ifs’ of the Italian campaign. The author skilfully reveals the planning and preparation for the attack along with the events of the actual fighting. The soldiers who conducted the assault are also given detailed attention, as are the reasons for its ultimate failure despite the initial Allied success.