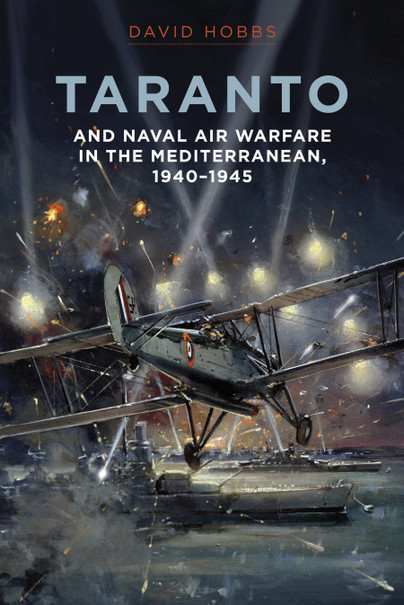 Taranto is an excellent addition to the series of books Hobbs has written involving Royal Navy aviation operations. For those whose interests lie in history or wargaming, especially those interested in World War II naval aviation, this book is worth reading.

This book’s main title is ‘Taranto’ but it is about so much more than that singular action. The whole range of Fleet Air Arm activity in the Mediterranean theatre, 1940-1945, is the real content and a full and fascinating story it is. There are many insights into little known activities especially those where shore based squadrons were supporting the RAF and the troops on the ground in the North African campaign. Readers can expect to have their eyes opened to the real value of the ‘antiquated flying string bag’ the Fairey Swordfish. Although superseded by fast single seater fighters there was always a niche which no other aircraft could fill and consequently they stayed in service for the whole period. An underlying message of the book is that during this period the battleship became obsolete to be replaced by the aircraft carrier. The author draws attention to the political difficulties in the Admiralty, the RAF and the aircraft supply chain which accounted for the necessity of eventually obtaining, by purchase or Lean Lease, American aircraft and American carriers.
Technical detail, personal stories and lots of photographs make this a must have book for readers with many different interests. A jolly good read which we highly recommend.

David Hobbs has provided a meticulously researched and expertly told operational history of the FAA in the Mediterranean. Highly recommended as a major contribution to overall air power history.

This well-researched and profusely illustrated book really is the definitive history of the FAA’s Mediterranean operations in the Second World War and is highly recommended.

If you want a book regarding the Royal Navy's Mediterranean war then I can thoroughly recommend this one as it goes into great depth, about the men, their ships, their crews and the aircraft plus the remarkable the courage to operate in such a hostile environment.

There can be few better qualified to write this definitive and riveting account of what, in essence, was the coming of age of the Fleet Air Arm and Carrier operations, than Commander David Hobbs, a retired Naval Aviator, past Curator of the world renowned Fleet Air Arm Museum and now professional Naval historian. Based on extensive research May bulletin 169-224.qxp_Layout 1 25/04/2021 09:43 Page 54223 over many years, the author provides a very clear summary of the higher level command and organisation of the Royal Navy on the outbreak of War, with specific reference to the early development and state of the Fleet Air Arm which sets the context for the book. He goes on to give exceptionally clear summaries of the strategic importance of operations against the Vichy French and Italian Fleets in the Mediterranean from 1940 onwards and detailed, exceptionally clear accounts of the Taranto strike in November 1940, of the subsequent Battle of Matapan and Operations Torch and Dragoon and support to other operations in North Africa, Greece, Crete, Sicily and Malta, including the Pedestal Convoy. Concurrently he explains the development of fighter direction and strike tactics, including the use of air launched torpedoes at night against ships in harbour and at sea. The achievements of the Fleet Air Arm are all the more remarkable because throughout the early part of the Campaign in the Mediterranean their aircraft were outmatched and outnumbered, yet their performance contributed significantly to the outcome of the Campaigns in North Africa and Italy. The text is profusely illustrated with photographs, many published for the first time, and supported by detailed Appendices which include details of aircraft and weapon types and various statistics and comprehensive end notes. If you only read one book on the development of the Fleet Air Arm and Naval air warfare in the Mediterranean during World War 2 then this should be it. Most highly recommended.

There has been a number of worthy books broadly covering this topic, including the vivid recollections of participants from admiral to aircrew, but none so comprehensive, detailed and authoritative as this. It is quite simply the definitive text, a book of reference, the closest a person could get to the subject matter short of examining the primary sources. The writer is not only a painstakingly thorough and scrupulous academic historian but a fluent wordsmith capable of conveying the drama and momentum of events and the experiences of its participants. The book is, therefore, very highly recommended.

This is a fantastic book looking at the Fleet Air Arm contribution in the Mediterranean and is a similar book to those you get that become the bible on one subject. This is a very thorough book in the telling and the information is very detailed and informative. The book reads very well indeed and doesn’t feel heavy at all. The book also covers subjects such as Operation Judgement, Matapan, the Pedestal Convoy and Operation Torch. I think that what also must be said is, along with the very high standard of writing and detail is the superb number of high-quality pictures and photographs featured in the book. They really do pop and standout. The fascinating part of the book really is the growth and early use of the Fleet Air Arm and seeing its progression, but the best bit has to be the courage and bravery of the men/pilots that carried out the fighting and flying. I really enjoyed the notes and the appendices at the back of the book, which I highly recommend. A definite 5-star rating from me.