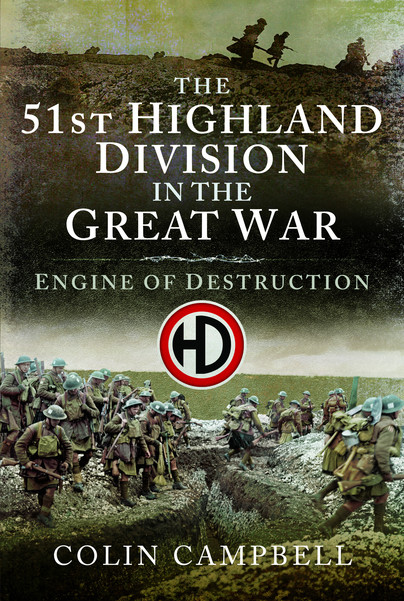 The 51st (Highland) Division in the Great War (Hardback)

Add to Basket
Add to Wishlist
You'll be £25.00 closer to your next £10.00 credit when you purchase The 51st (Highland) Division in the Great War. What's this?
+£4.50 UK Delivery or free UK delivery if order is over £35
(click here for international delivery rates)

So great was the reputation of Scottish combat troops in the trench warfare of World War I that an unnamed commentator told Haldane, author of the_History of the 4th Battalion, Seaforth _Highlanders that ‘the two most terrible engines of destruction ever made by man were the 51st and 15th Divisions, both Scottish. . .’

In this new evaluation timed to mark the centenary of the Great War (1914–18), Colin Campbell allows the experience of the elite 51st Division to speak for itself. He has researched battalion and brigade official war diaries and regimental and battalion histories and blends them with first-hand accounts and letters, many of which have never been published before.

It is said that German soldiers feared the 51st (Highland) Division more that any other British or Empire division.

Both detailed and touching, The 51st (Highland) Division in the Great War is an amazing book in tribute to the Scottish soldier.

"This book provides a very detailed narrative of the 51st (Highland) Division's experiences during the Great War, from the mobilization of the territorial 1st/1st Highland Division, renamed the 51st (Highland) in May 1915, through to its disbandment in March 1919."

This book’s outstanding feature is that it explains some of the issues that researchers face when consulting primary sources such as unit and formation war diaries. It also explains the convention extant at the time that ‘blue-on-blue’ incidents were not to be mentioned.
The book will appeal to descendants of men who served in the Division, to members of units or affiliated units associated with the Division, and to readers interested in the conditions suffered by the soldiers on the Western Front.

Like so many official, formation and regimental histories published shortly after the end of the conflict, they lack the accuracy, balance and true perspective which is rarely possible whilst those intimately involved are still with us. Therefore this is a refreshingly readable and balanced history which through extensive and sensitive use of extracts from letters and diaries really does give the reader a clear sense of the War through the eyes of those who served in the Division and earned for it such an enviable reputation for toughness and success on the battlefield. A welcome addition to any Great War library.

This book is perfect for those interested in the lives of Scottish soldiers.

Notes, maps, and illustrations are plentiful, making this a worthwhile read for anyone with an interest in the 51st Division during the war.

This is a really excellent new history of a key Western Front Division: well researched & written, good maps & a lot of unique content. An important new book about the British Army in the Great War.

This book is able to combine the micro story with the broader point of view. In fact often in the text are frequent testimonies (some highly enjoyable and representative of the way to deal with a terrible war) of soldiers and officers of the division.

Included in the book are stunning sketches, clear uncluttered maps, artwork and photographs, each linking to the vast experience which the Division had on the Battlefield. One of my own favourite images is that of the 7th Gordons clearing Y-Ravine by Fred A. Farrell. Moreover, despite its hardback cover and quality design, it is a perfect size to fit in a suitcase if visiting the battlefields and following in the footsteps of this Division.

The story of the 51st Division is well constructed and supported by good sources. Inevitably there is much detail about the attack at Beaumont Hamel in November 1916 but the author has also given due weight to the other actions from its re-numbering in May 1915 to its disbanding in March 1919. An excellent research tool but also an easily read narrative.
Michael McCarthy. Battlefield Guide.