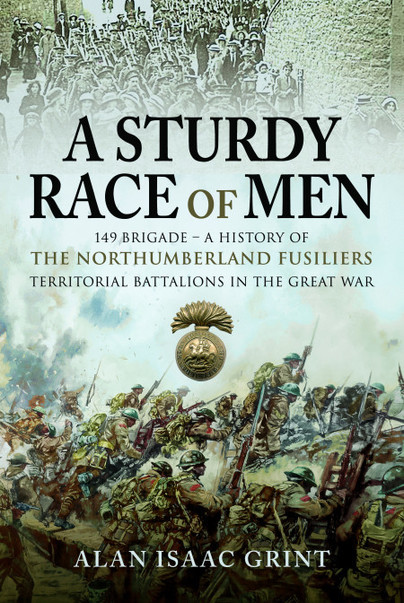 A Sturdy Race of Men (Hardback)

Add to Basket
Add to Wishlist
You'll be £25.00 closer to your next £10.00 credit when you purchase A Sturdy Race of Men. What's this?
+£4.50 UK Delivery or free UK delivery if order is over £35
(click here for international delivery rates)

The Territorial battalions of the Northumberland Fusiliers (149 Brigade) served with distinction in France and Flanders from 1915 until May 1918. Indeed, their performance at St Julien in April 1915 was recognised in the House of Lords by Lord Kitchener who had previously been somewhat contemptuous of Territorial Forces, advocating the formation of a new citizen army.

Over the next three terrible years 149 Brigade saw major action on the Somme (1916), at Arras and in Flanders (1917) and during the 1918 German offensive. The annihilation of three battalions on the Aisne in May 1918 effectively removed the Brigade from the order of battle.

A superbly researched and long overdue recognition of the Territorials’ achievements and sacrifice, A Sturdy Race of Men will be welcomed by all those who have an attachment to the Northumberland Fusiliers. This remarkable regiment comprised fifty-two battalions, twenty-nine of which served overseas.

Alan Grint provides a graphic description of 149 Brigade's record, with numerous clear and simple maps to support it.

This is a superb new book from Pen and Sword Books which tells the story of the Territorial Battalions of the Northumberland Fusiliers in WW1 - packed with information & rare photos & lots of details of individual soldiers. Recommended!

This was an excellent book to read, provoking several thoughtful moments, helped in no small measure by my recent trip to Ypres and some of the ground the men of the Northumberland Fusiliers fought over. As a unit history it is quite comprehensive as a large part is sourced from the unit war diaries as well as letters to their families of the men doing the fighting and photographs from both official and private collections. There are a number of sketch maps to illustrate the dispositions of the units in the various sectors they fought in. I found the book to be a piece of work which resonates personally with the author, Alan Grint, due to his being a Northumbrian, born and brought up in Ashington, North East of Newcastle upon Tyne. As such it is one of almost reverence to these men being among his community forebears.

The 149 Brigade, known initially as the Northumbrian Brigade, comprised the four Territorial Battalions of the Northumberland Fusiliers; 1/4th, 1/5th, 1/6th and 1/7th Battalions. All drawn from local towns and villages they embarked for France in April 1915 and fought with distinction at Ypres, on the Somme and at Arras until annihilated in May 1918. Few brigade histories of the First World War have been published and this is a well written, balanced account which draws very heavily on first hand accounts, local boy stories and portrait photographs from the local newspapers. It includes various selected rolls of honour for the principal actions in which the various Northumberland Fusilier Battalions took part. Recommended.

A credit to the author and a fine testament to those who served.

This is a meticulously researched book which tells the story of this Territorial groupings achievements. In turn, it is a vital news edition to the varied histories of the First World War; not least if you have a special interested or connection to the Northumberland Fusiliers.  It brings together historical fact and personal memory.  It is not focussed on a single battle or person, but is the story of what happened to a brigade from its formation in May 1915, to its disbandment four years later.   It contains the personal accounts of the officers and men of the Northumberland Battalions who fought which helps bring the story to life.  The book is structured in a logical manner, telling the story of the Regiment at war, from the Second Battle of Ypres, time spent in the Armentieres Sector, The Somme, Arras, as well as the German advance.

Article: 'Wartime bravery of the men of the Territorials' as featured by