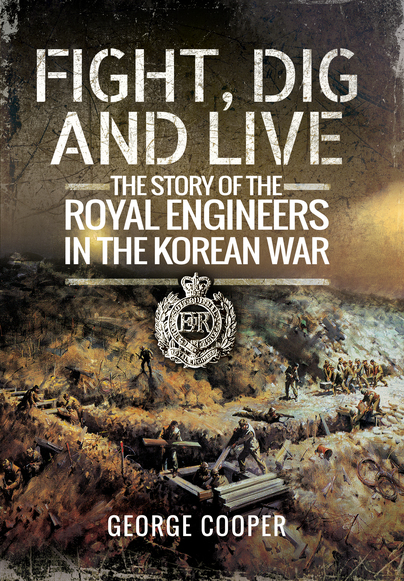 Add to Basket
Add to Wishlist
You'll be £9.09 closer to your next £10.00 credit when you purchase Fight, Dig and Live. What's this?
+£4.50 UK Delivery or free UK delivery if order is over £35
(click here for international delivery rates)

The Korean War, which began with an unprovoked attack by North Korea in 1950, went on for three long years. Over 100,000 soldiers of the United Nations forces, including those of the Republic of Korea, were killed and three times that number wounded. United Kingdom casualties amounted to some 300 Officers and 4,000 Other Ranks.

The Royal Engineers deployed a Field Squadron to Korea in the Autumn of 1950 and this was expanded to a Regiment the following year. Involved in fierce fighting, the Sappers suffered grievous casualties including 42 killed and several hundred wounded. Their gallantry was rewarded by numerous gallantry awards, including two DSOs, thirteen MCs, (one by the author), eight MMs and the most distinguished of all, a Distinguished Conduct Medal, second only to the Victoria Cross.

It was a vicious war whose intensity never slackened and in the last two months alone the Communist artillery fired over 700,000 rounds against 4.7 million fired back by the United Nations. The Royal Engineers were involved at all levels, from patrols and minefields, to defence works and, providing support to all manner of operations such as transportation, bridging and the important provision of postal services, so vital for morale.

Inevitably, though, the focus in that of a war like Korea is often on sapper participation in the forward area where they were often involved in close-quarter fighting with the enemy. Sappers certainly lived up to the title of this book: Fight, Dig and Live.

A gripping read and without hesitation highly recommended.

In 1950 the North Koreans launched an unprovoked attack on their Southern neighbours sparking a war that lasted over three years. This book highlights the role played by the Royal Engineers, who were doing such work as road building, mine clearance, bridging and not least, fighting fiercely in battles throughout the peninsula. Some 100,000 UN forces were killed in action, including 4,500 British troops and 42 sappers. The text is very enlightening as their stories have been largely forgotten. It is also very humorous and tragic, made more so because the accounts come from the soldiers themselves.

Some poignant verses interspersed throughout the volume along with evocative photographs enhance the quality of humanity that underlies the whole of this absorbing and long overdue account of one of the Corps' most inspiring episodes.

The Institution of Royal Engineers