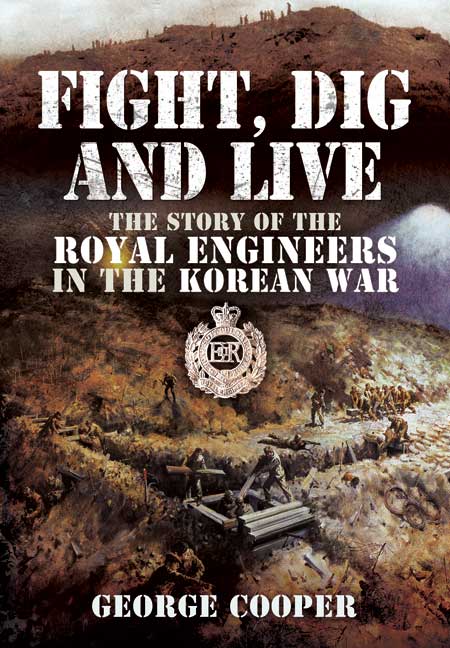 Click here for help on how to download our eBooks
Add to Basket
Add to Wishlist
You'll be £4.99 closer to your next £10.00 credit when you purchase Fight Dig and Live. What's this?
Need a currency converter? Check XE.com for live rates

The deeply unpleasant Korean War began in 1950 with an unprovoked attack by North Korea. Hostilities went on for three long years, followed by an uneasy armistice that continues to this day. United Kingdom casualties amounted to some 300 Officers and 4,000 Other Ranks, many of them conscripts, while a total of over 100,000 United Nations soldiers were killed and three times that number wounded.

A Royal Engineer Field Squadron deployed to Korea in late 1950 and this was expanded to a Regiment the following year. Often involved in fierce fighting, the Sappers suffered grievous casualties including 42 killed and several hundred wounded. Their gallantry was rewarded by numerous awards, including a CBE, an OBE and eight MBEs, two DSOs, thirteen MCs, eight MMs and, most notably, a Distinguished Conduct Medal, second only to the Victoria Cross. It was a vicious war whose intensity never
slackened; in the last two months alone the Communist artillery fired over 700,000 rounds against just under five million fired back by United Nations forces. The Royal Engineers, among them the Author, were indispensible at all levels, from the forward areas, where they were often involved in close-quarter fighting, right back to the base in Japan. Their skills and roles varied from patrolling, river crossing and road building, to mine-clearing and -laying, defence works, bridging and postal services, so vital for morale. Other tasks included blowing things up (always a favourite occupation) and clearing booby traps (less popular). In a war zone with one of the most inhospitable climates in the world, merely keeping alive was a challenge. This book is not merely a gripping, yet thoroughly readable, account of the Sappers’ achievement but a tribute to the sacrifice of those who did not return.

This is a very full account of the significant part played by the 'Sappers' in the Korean War, that started with the surprise attack on the South by North Korean forces. Three long years of serious and unpleasant warfare took place and ended with an uneasy armistice which is still continuing.

The human cost was immense: UK losses along were 300 offices and atleast 4,000 other ranks. This does not include the terrible injuries, physical and mental, inflicted on those who did eventually survive. Unfortunately, the word Korea means very little to most of the general pubic today, but this book gives everyone the opportunity to learn about it through the eyes of the author who was there as a junior officer. Incidentally, he later became the Chief Royal Engineer as a senior General.

The book not only tells of great gallantry and superb enterprise; it also reveals some very interesting and amusing exploits by men of all ranks. This is a book that should interest everyone. Highly recommended.

This book is not only a fascinating account of the Sappers' achievement but a tribute to the sacrifice of those who did not return.

This book is not merely a gripping yet thoroughly readable, account of the sappers achievement but a tribute to the scarifies of those who did not return.

The story is well balances, covering both the exciting fighting and myriad of often banal, yet essential, tasks carried out in an operational theatre. A good, if slightly niche, account.

This gripping an sometimes humorous book of resource and courage in a vicious war – the first fought under UN auspices – reminds us that Sappers are fighting soldiers, none more resourceful or steadfast. Whether clearing the way for the infantry, building their bridges or fighting with them.