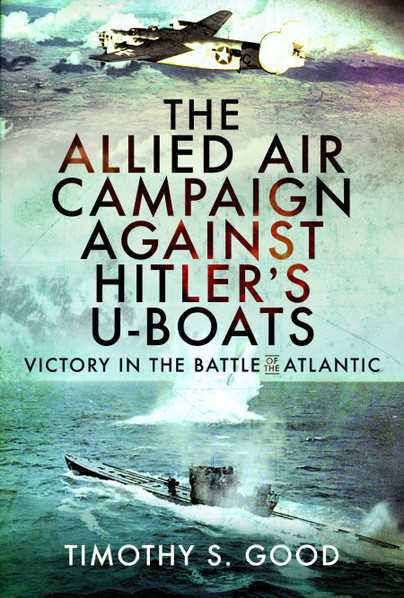 Victory in the Battle of the Atlantic

Preorder
Add to Wishlist
You'll be £17.50 closer to your next £10.00 credit when you purchase The Allied Air Campaign Against Hitler's U-boats. What's this?
+£4.50 UK Delivery or free UK delivery if order is over £35
(click here for international delivery rates)

No weapon platform sank more U-boats in the Second World War than the Allied aircraft. Whether it was an American ’plane operating from American escort carriers, US aircraft from Royal Air Force bases, or British aircraft from bases throughout the world, these officers and men became the most decisive factor in turning the tide of the Battle of the Atlantic against the German submarine threat. While the German crews could threaten escort vessels with torpedoes, or avoid them by remaining submerged, their leaders never developed an effective strategy against aircraft.

However, the Allied aircraft did not enjoy much early success. British, Canadian and Australian air crews that fought the U-boats from 1939 until 1941 achieved few triumphs. They possessed neither the aircraft nor the bases necessary to deliver consistent lethal attacks against German submarines.

In 1941, the Royal Air Force finally began implementing an effective aircraft response when it initiated training on the American-built Consolidated B-24 Liberators. Supported by other types then in service, these four-engine bombers would prove to be decisive. With America’s entry into the war, the United States Navy and the United States Army Air Forces also began employing Liberators against the U-boats so that by mid-1943, the Admiral Karl Dönitz, commander of U-boat forces, withdrew his submarines from the North Atlantic in recognition of the Allied aircraft’s new dominance.

From Dönitz’s retreat to the end of the war, Allied aircraft continued to dominate the U-boat battle as it shifted to other areas including the Bay of Biscay. Dönitz eventually ordered his U-boats to remain on the surface and engage Allied aircraft as opposed to submerging. This approach did lead to the demise of some Allied aircraft, but it also resulted in even more U-boat being sunk. Most critically, Dönitz acknowledged with his new policy that he knew of no tactics or weapons that would defend his submarines from Allied aircraft. In the end, it was a matter of choosing whether his submariners would die submerged or die surfaced. Either way, Allied aircraft prevailed.

The Allied Air Campaign Against Hitler’s U-Boats is the most comprehensive study ever undertaken of this most crucial battle which helped turn the Battle of the Atlantic irrevocably in favour of the Allies.

Having received an M.A. from the University of Durham and a diploma from the United States Naval War College, TIMOTHY S. GOOD has written or edited five previous books. These include We Saw Lincoln Shot: One Hundred Eyewitness Accounts, American Privateers in the War of 1812, and The American Eagle Squadrons of the Royal Air Force. He lives in Illinois in the United States.