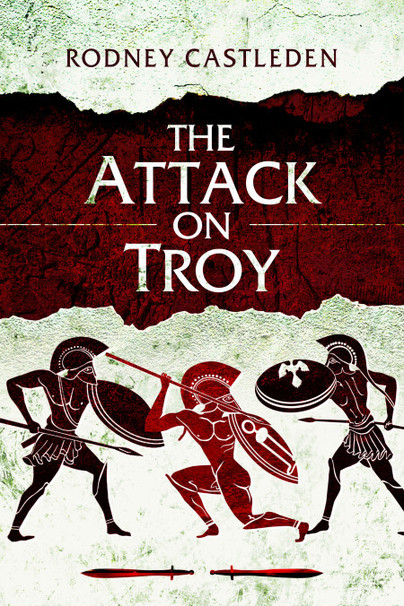 The Attack on Troy (Paperback)

Add to Basket
Add to Wishlist
You'll be £9.09 closer to your next £10.00 credit when you purchase The Attack on Troy. What's this?
+£4.50 UK Delivery or free UK delivery if order is over £35
(click here for international delivery rates)

3300 years ago Agamemnon, king of Mycenae in Greece, attacked the city of Troy in western Anatolia. The bloody siege that followed gave rise to one of the most famous legends of the ancient world, and the search for the truth behind the legend has intrigued scholars ever since. In this fascinating new investigation Rodney Castleden reconsiders all the evidence in order to establish the facts and give a historical basis to the most potent myth of ancient warfare.

Everyone knows the story of the fall of Troy, but this book goes into a great amount of detail. I was blown away with the amount of information on not only Troy, but many of the surrounding areas that would have had an impact on Troy.

I absolutely loved this book! I was drawn in immediately and the history presented was fabulous. I have not seen this level of detail in a long time, and this book went into more than just the fall of Troy. If you are interested in the fall of Troy, this book goes into the full breakdown of the many levels of Troy and the different changes that the city went through over its diverse history.

The Attack on Troy is clear, smooth, well-organized, accessible to the general reader, up to date, and is careful about noting when information is speculative. An informative well-told look at the truth that may lie behind one of literature’s greatest works. Happily recommended.

A decent looking bibliography (mainly 1960s to 2000) and good looking photographs. A look at the city as we know it and Homer's version in the Iliad. Get a look at Troy's location, war, and how they dealt with it. Good maps of attacks that have said to happen and more.

The ancient attack of Troy is one of the most infamous throughout all of history. But why is this so? Did the war heroes number in their tens of thousands, as dictated in The Epic Cycle, or does its notoriety remain merely due to it being the last raid of its kind? Did the attack stem from declared vengeance over the abduction of famed beauty, Helen, or was it a routine invasion to gain glory and slaves? Was Troy the teeming metropolis or a more sedate settlement? All these questions, plus many more, are explored an unpacked throughout this intriguing non-fiction.

What most impressed me about this observation of the ancient world, was the variety of lenses that Castleden used to garner some semblance of the truth about it. He combined research from archaeological digs, the events portrayed in Homer's infamous works, and more modern-day revelations and research related to the attack. These myriad insights were pieced together to form an image as close to the truth as a modern-day individual could expect to find.

This remained fascinating, accessible, and seemingly well-researched throughout. I certainly learned a lot would definitely recommend this to those wishing to learn a basic understanding of the events that led to the attack, a potential play-by-play of occurrences, as well as a detailed overview of a broad spectrum od related topics such as the people, warfare tactics, and battle clothing and weapons of that time.

No matter how you feel about Homer's representation of Troy, this book is sure to be a real eye-opener. It's packed with information that is laid out in a thoroughly accessible way and is very easy to read. What we know as fact is given substance by the inclusion of HOW we know it, and any speculation is clearly that and given possible alternatives. It will be interesting to read The Iliad again having read this book.

The question of whether or not there was a Trojan War has occurred for some time. Was there a Paris, Achilles, Menelaus, or Helen? What about that horse? Was it really a horse? Alexander the Great supposedly stopped at the tomb of Achilles so the hero worship has been going on for quite a bit.
Castleden’s book, a scholarly work, offers historical evidence and context for a real Trojan war, if not quite the version that Homer recorded, though Castleden does address the areas where Homer and truth coincide, such as the place names and helmet types just to name a couple places.
The book is less a discussion of Mycenae and Hittite history and culture as well as conflicts between the two societies. There is the question of the letter to the Hittite king about a certain runaway prince with a woman.
The book is scholarly but not dry. There are discussions about siege strategies, the role of the generals on the battlefield and such. You do not have to be an expert on the ancient world or even ancient Greece for the book to be readable or concise.

The Attack on Troy delivers a good narrative of the Trojan War. Inevitably given that more than 3000 years have passed since the events surrounding the fall of Troy, much of the discussion demands a fair pinch of ‘inherent probability’ but the author makes a convincing case for the geography of the area and its likely impact on the fighting. Coupled with a good overview of the geo political conditions that obtained in the region, the narrative is well presented and whilst there is no proof of the numbers of soldiers actually involved in the fighting nor the real calendar of events, it allows the reader to form their own opinion. And there was no horse with Greeks inside it.