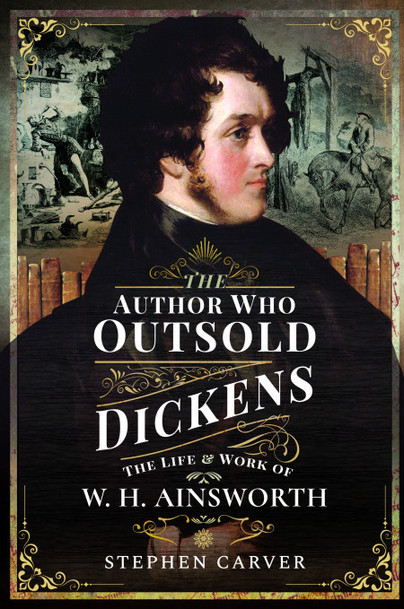 The Author Who Outsold Dickens (Hardback)

The Life and Work of W H Ainsworth

Add to Basket
Add to Wishlist
You'll be £25.00 closer to your next £10.00 credit when you purchase The Author Who Outsold Dickens. What's this?
+£4.50 UK Delivery or free UK delivery if order is over £35
(click here for international delivery rates)

William Harrison Ainsworth (1805 – 1882) is probably the most successful 19th Century writer that most people haven’t heard of. Journalist, essayist, poet and, most of all, historical novelist, Ainsworth was a member of the early-Victorian publishing elite, and Charles Dickens’s only serious commercial rival until the late-1840s, his novels Rookwood and Jack Shepherd beginning a fashion for tales of Georgian highwaymen and establishing the legend of Dick Turpin firmly in the National Myth. He was in the Dickens’ circle before it was the Dickens’ circle and counted among his friends the literary lions of his age: men like Charles Lamb, J.G. Lockhart, Leigh Hunt, W.M. Thackeray and, of course, Dickens; the publishers Henry Colburn and Richard Bentley; and the artists Sir John Gilbert, George Cruikshank, and ‘Phiz’ (Hablot K. Browne). He also owned and edited Bentley’s Miscellany (whose editorship he assumed after Dickens), the New Monthly Magazine, and Ainsworth’s Magazine. In his heyday, Ainsworth commanded a massive audience until a moral panic – the so-called ‘Newgate Controversy’ – about the supposedly pernicious effects on working class youth of the criminal romances on which his reputation was built effectively destroyed his reputation as a serious literary novelist.

Carver is to be thanked for keeping his author in the public consciousness, and pointing out that William Harrison Ainsworth despite the vicissitudes of his career, played a singular role in the development of English literature in the nineteenth century.

"Carver strikes a balance between presenting the facts of Ainsworth's life and works...and telling a lively story about an interesting subject. The book is informative and enjoyable, and some of Carver's asides are both funny and astute...Ainsworth's dismissal by critics, both in his lifetime and afterwards, feels so unfair."
- Listen to Hannah's full review here

I would recommend this book to all those interested in the development of the English novel and those who are keen to learn more about the Victorian literary culture.

This is a warm-hearted and meticulous book about a neglected author.

This was a fascinating book and very well written and researched by an excellent author who I have read before in his excellent book, The 19th Century Underworld, which we rated as one of the best books of 2019. I would say that this book would be an interesting read about the Victorian era and fans of this era would enjoy the book, but it would probably only appeal mainly to those with a rich interest in literature. The author Stephen Carver clearly writes well about this era and I look forward to reading other books by the author. I would rate this book a 4 out of 5 stars.

William Harrison Ainsworth (1805-1882) was a massively popular author in his day and a key figure in literary and publishing circles. But his day came and went and he is now largely forgotten – certainly not the household name he once was. This meticulously researched and comprehensive biography aims to bring him back centre-stage and introduce him to a new readership. A worthwhile aim indeed, and I found much of this book informative and interesting, especially about Victorian publishing and Ainsworth’s social circle, which included just about everyone in the world of letters. So overall the book is well worth reading.

Article: 'Norfolk author Stephen Carver is a man at the top of his game' as featured by

An interesting look at another that was friends with Dickens. How he got into the industry and into writing. Mentions of works and what was happening at the time of writing. Good for those who like to look at the lives of authors/creatives.

Ainsworth has always been a favourite of mine. Carver’s very readable book enabled me to get to know him a little better — so often when we read a novel we have no idea of the life of the author behind the book!

Yet this is not just a biography: Carver’s book is titled The Life and Work and his book functions both as a biography and, due to Carver’s analysis of Ainsworth’s novels, a companion to the many novels which Ainsworth published throughout his life.

This book is an excellent buy for any general reader who wishes to find out about the life of a famous forgotten Victorian novelist and I wish it had been around when I was doing my MA thesis, for the book will be very useful to students as well.

Click here to read author Q&A as featured by

Author article 'Dick Turpin: The not so dandy highwayman' as featured by

Literary fame and longevity can be somewhat mercurial. Best selling authors can be famous, popular figures one moment and sadly forgotten at a later date, while for others the reverse is true. Much is to do with what you are writing at a particular time and its relationship to the world around you, if like William Harrison Ainsworth, Sir Walter Scott had been born in 1805 instead of 1777 would he be so revered today?

This fascinating and most readable biography of a largely forgotten 19th Century writer examines the reasons for his, at the time immense popularity and later subsequent decline. As the title of the book points out, for a time he did outsell Dickens.

Ainsworth's historic fiction was resplendent with romanticism often also with elements of Gothic. Criminal figures like Dick Turpin and Jack Shepherd would feature leading to a critical moral backlash against allegations of mythologising and romanticising such figures, the so-called ‘Newgate Controversy’. He was certainly not helped by the attitude and lack of support by his so called friends in the literary establishment. But although Ainsworth would end his life relatively poor and his last work appeared in the Bolton Weekly News it would be wrong to view his life as a tragic tale for right up to his death he did what he always loved to do, writing.

As Stephen Carver says, his work may not be great literature but at its best it is magical and even at its worst it is great fun. Ultimately I suppose, Ainsworth found himself writing at a time when his romanticism was being supplanted by realism with the advent of modernism on the not too distant horizon. Hopefully this biography will lead to interest in his work and in fact the first thing that I did on completion was procuring a copy of The Lancashire Witches.

I have never heard about William Harrison Ainsworth before, so I found this book both intriguing and educational. When we think about the era in which Ainsworth lived, the first name to pop into our mind is most probably that of Charles Dickens, just as for the Regency era, it is Jane Austen. However, they were not the only popular writers in those periods, and learning about their peers can often be even more pleasant or exciting. I think I wouldn't have heard about this book if I had not seen it on NetGalley and I'm so glad I did!

Stephen Carver uses this new work to explore the publishing and minor bits of the private life of William H. Ainsworth in a thoughtful and informative way.
I was interested in this book because I had taken Victorian literature and Romantic literature classes while working on my undergrad and grad degrees, but I had not heard of Ainsworth before and wanted to know why.
Examining the life of a now much forgotten Victorian author gives readers insight into the way literature can be deemed important enough to be included in academic cannon and what we could gain for learning more about popular authors from each time period, and I was not expecting to gain this information when starting the book. Carver focuses predominantly on Ainsworth's work as an author, editor, and publisher and the relationships he built and lost because of his literary focuses. The book provides first-hand accounts from letters, book excerpts, and critical reception from the time period, which adds greatly to the discussion of Ainsworth's life in literature. The book also examines why a highly popular, and widely read author fell from grace with his literary colleagues due to a cultural shift in what was deemed enlightened rather than what was catering to the masses. I am glad I got to know more about Ainsworth and I look forward to reading some of his Gothic and Romanized works in the near future.
I believe anyone with an interest in the time period, understanding the rigors of maintaining serial publishing deadlines, cultural shifts, literary history, or anyone that wants to know more about one of the authors that outsold Dickens should read this book.

Stephen Carver puts the focus on the publishing life of Ainsworth with short glimpses into his private life. In the first chapters Ainsworth remains a strangely distant figure but with the start of the moral panic he becomes a real human being. We learn a lot about the publishing industry in Victorian England, about clique-building and who’s who. Ainsworth’s letters give a good idea of how life was in the business as an editor (for Dickens among others) and as a serial writer with contracts to keep, while under pressure from all these hateful accusations.

William Harrison Ainsworth and his novels may have fallen out of recent memory, but they had towered over the competition in the 19th century. Carver’s writing style comes off like a cross between a consumer product description (i.e. telling you of a item’s value or how well it works) and a tall tale (like Paul Bunyan or Casey Jones), because, yes, Ainsworth’s novels are great, hale, daring-do, a little overdramatic, yet under-appreciated, but we’ll try not to forget him, his popularity, or acts of publishing.

This illustrated biography draws on his unpublished correspondence and on his work as both a journalist and novelist.

William Harrison Ainsworth was born in Manchester on 4 February 1805. Journalist, essayist, poet and, most of all, historical novelist, Ainsworth was a member of the early-Victorian publishing elite, and Charles Dickens’s only serious commercial rival until the late-1840s, his novels Rookwood and Jack Shepherd beginning a fashion for tales of Georgian highwaymen and establishing the legend of Dick Turpin firmly in the National Myth.

William Harrison Ainsworth (born 4 February 1805) died. Journalist, essayist, poet and, most of all, historical novelist, Ainsworth was a member of the early-Victorian publishing elite, and Charles Dickens’s only serious commercial rival until the late-1840s, his novels Rookwood and Jack Shepherd beginning a fashion for tales of Georgian highwaymen and establishing the legend of Dick Turpin firmly in the National Myth.