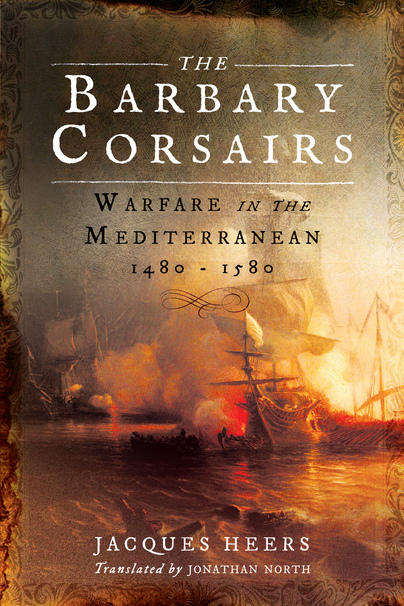 Add to Basket
Add to Wishlist
You'll be £14.99 closer to your next £10.00 credit when you purchase The Barbary Corsairs. What's this?
+£4.50 UK Delivery or free UK delivery if order is over £35
(click here for international delivery rates)

The Barbary Corsairs first appeared to terrorise shipping in the 16th century. These Muslim pirates sailed out of the ports of North Africa, primarily Salé, Rabat, Algiers, Tunis, and Tripoli. This area was known in Europe as the Barbary Coast, a term derived from the name of its Berber inhabitants. Acting as officers of the sprawling Ottoman Empire, these pirates plundered the trading routes of the Mediterranean and sowed horror in the hearts of Christians everywhere.

The most famous and powerful were the Barbarossa brothers, sons of a renegade Christian. The true founders of the Algiers Regency, they initially preyed on fishing vessels or defenceless merchantmen before growing bolder and embarking upon more brazen expeditions – attacking fortified ports and cities; raiding and kidnapping inhabitants of the African coast; and hunting ships from the Christian nations.

This translation of Jacques Heers’ work follows the extraordinary exploits of the brothers, and those of other corsairs and profiteers, set against the turbulent backdrop of trade, commerce and conflict throughout the Mediterranean during the 14th-16th centuries. It is an enthralling adventure, robustly written, and it brings to life an age when travel and trade were perilous enterprises.

A long-awaited English-language translation of the author’s Les Barbaresques, first published in 2001, this important book departs from most other works that examine the history of the Barbary corsairs by focusing almost exclusively on the century loosely bound between 1480 and 1580...

... The notes and the bibliography are, as a result, a treasure trove for primary and secondary source material which may well have escaped the attention of researchers and scholars working on this side of the Atlantic.

The most complete study of the naval war between Christians and Muslims in the Mediterranean. – A welcome translation of the masterly study of the rise of the Barbary corsairs by a professor at the Sorbonne – Highly Recommended.

Born in Paris in 1924, Jacques Heers was raised in La Ferte-Bernard in the Sarthe. Having become a teacher in 1945, he went on to become a historian specializing in the history of the Middle Ages, Professor at the Faculty of Humanities of Paris-Nanterre and Director of Medieval Studies at Paris IV. He passed away in January 2013.