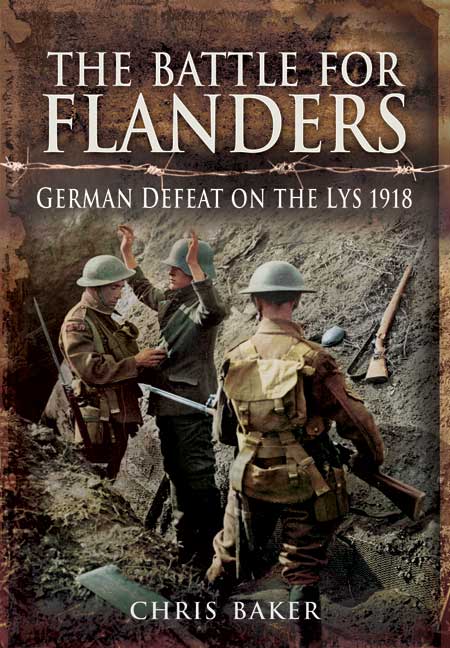 The Battle for Flanders (ePub)

Click here for help on how to download our eBooks
Add to Basket
Add to Wishlist
You'll be £4.99 closer to your next £10.00 credit when you purchase The Battle for Flanders. What's this?
Need a currency converter? Check XE.com for live rates

The Battle of the Lys, fought in April 1918, was critical for the Allies and for Germany. The outcome of the Great War hung in the balance. After the successful German offensive on the Somme, their breakthrough on the Lys threatened Ypres and the British hold on Flanders and brought them close to victory on the Western Front. The Allied line was broken – it was only saved by improvisation and great gallantry - and the German onslaught tested Allied cooperation under the newly appointed Generalissimo Ferdinand Foch to the limit. Yet, as Chris Baker shows in this compelling account, the declining force of the German attack revealed deficiencies in material, organization and morale that led to their ultimate defeat.

For a long time there has been a gaping hole in Great War Writings. This hole is the story of the German 'Georgette' offensive of April 1918 and Chris Baker's first book has helped immeasurably resolve this

“A highly recommended gazetteer with information about many of the locations that were attacked.”

“While some readers may be familiar in British attacks at Ypres and on the Somme; the German defeat on Lys perhaps played a more significant role in why Germany failed to win the war.”
“This makes the book a must for anyone that wants to find out more about this relatively unknown, yet highly significant battle, in the war’s final year.”

“Baker is a man who certainly knows his stuff about this battle.”
“The German attack on the River Lys had been, until now, an episode of the war which awaited its historian – Baker is now that historian.”
“A must for anyone who wants to find out more than about this relatively unknown, yet highly significant battle, in the war’s final year.”

This is a good clear account of the battle, supported by a good selection of eyewitness accounts, although these are overwhelmingly from the Allied point of view. Baker also examines the reasons for the initial German strengths, looking at the key strengths of the German army of 1918 and the weaknesses of the initial Allied positions, and the reasons for their eventual failure. Here he suggests that a combination of a number of key defensive successes, combined with the general lack of mobility of the German army played the main part in the eventual British victory on the Lys.
This is an excellent study of a vital but often neglected battle, and should be of great value to anyone interested in the fighting on the Western Front.

.. meticulously researched .. wealth of information which vividly portrays the desperation and hardship of the action .. author does this in a highly readable style which holds the reader's attention .. important contribution to the understanding of the battle for Flanders and its events leading up to the final Allied victory later in the year.

The Battle of the Lys was critical for both the Allies and the Germans. Whilst the fierce German onslaught tested Allied co-operation to its limits, the attack also revealed deficiencies in both the organisation and morale of the enemy. Here the author reconstructs the battlefield in vivid detail, using graphic eyewitness accounts to emphasise the importance of the battle and its contribution to Germany's ultimate defeat. An excellent work. 10/10.