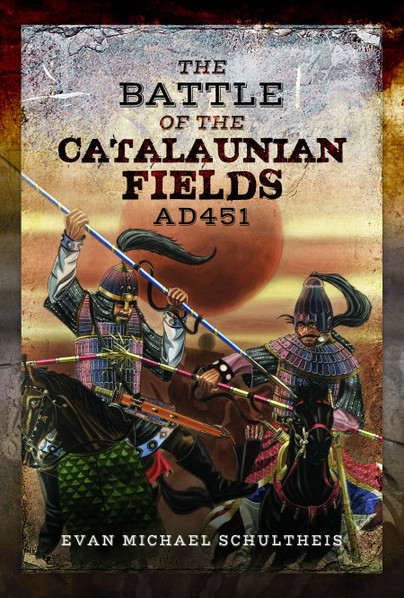 The Battle of the Catalaunian Fields AD451 (Hardback)

Flavius Aetius, Attila the Hun and the Transformation of Gaul

Add to Basket
Add to Wishlist
You'll be £25.00 closer to your next £10.00 credit when you purchase The Battle of the Catalaunian Fields AD451. What's this?
+£4.50 UK Delivery or free UK delivery if order is over £40
(click here for international delivery rates)

Evan Schultheis reconsiders the evidence for Attila the Hun’s most famous battle, the climax of his invasion of the Western Roman Empire that had reached as far as Orleans in France. Traditionally considered one of the pivotal battles in European history, saving the West from conquest by the Huns, the Catalaunian Fields is here revealed to be significant but less immediately decisive than claimed.

This new study exposes over-simplified views of Attila’s army, which was a sophisticated and complex all-arms force, drawn from the Huns and their many allies and subjects. The ‘Roman’ forces, largely consisting of Visigoth and Alan allies, are also analysed in detail. The author, a reenactor of the period, describes the motives and tactics of both sides. Drawing on the latest historiography and research of the primary sources, and utilizing Roman military manuals, Evan Schultheis offers a completely new tactical analysis of the battle and a drastic reconsideration of Hun warfare, the Roman use of federates, and the ethnography of the Germanic peoples who fought for either side. The result is a fresh and thorough case study of battle in the 5th century.

Although the book is named after the battle, it only actually takes up one of the six chapters. What we actually get is a fascinating account of the impact of the Huns on the two halves of the Roman Empire, both of which suffered from their raids, with the eastern Empire losing several very costly field battles against them. We do get a good account of the battle itself, combined with a convincing suggestion for its location. However for me the best thing about the book is the final chapter, which looks at the aftermath of the battle in far more detail than is often the case.

This is a thorough and solid introduction to the battle; paired with Hughes [Attila the Hun], you have all you'll need.

For those readers with an interest in the military history of the late antiquity period, especially the doings of one Atilla the Hun, "The Battle of the Catalaunian Fields AD451" is for you. The author has done an excellent job of research with original documents, discussing the pros and cons of each source, then adding comments from more recent sources. There are a number of color photos illustrating arms, equipment and the current state of the battlefield. Also included are two appendices: one a chronology, the other a force estimate for the Roman Army. Of extreme importance here is the writing style - it is clear and focused, making for an informative read.

Many know the name 'Attila', but few known much more about this important conqueror. This highly readable account will correct the deficiency. – Much Recommended

The first thing to say, is this book is a historical data nerds dream. While the book findings conclude half way though the book, there is a huge section on the force estimates from the notitia dignitatum. This pretty much lays out the commands, strengths, etc of the eastern Roman Empire.

It is astounding how detailed this is.

I really enjoyed this book. The detailed descriptions of where the source material comes from, was for me the highlight of the book. I am always amazed how this stuff survives.

I can see this being used by wargammers looking to build up regiments and armies of the period and also by reenactors looking to create units and regiments for living history. In fact there are several photos of reenactors in period clothing and weaponry. The author is an reenactor which seems to help provide groups of the period with a lot of useful stuff.

I came to this book not knowing too much about the battle that was said to have saved Western (Latin) civilisation from the barbarian Huns, but keen to know more. The author dedicates much time to drawing on, and debating the validity of the available sources for the battle itself and the political and cultural background. At times it is hard reading but well worth it as the author allows the reader to draw conclusions from the sometimes competing interpretations of historians and experts. As would be expected at a distance of some 15 centuries there has to be some interpretive thinking on the location of the battle and its course, but the methods used and the understanding of the chosen ground makes the delivery believable. The maps are good and the author’s photographs of the site add much to the narrative. There is also an exhaustive appendix identifying the assumed unit strengths.

Evan Schultheis holds a BA in History and a BS in Chemistry from Winthrop University in South Carolina. He is also a member of a re-enactment group who recreate both Hun and Roman forces of the fifth century. He has been engaged in detailed research on all matters relating to the Battle of the Catalaunian Fields since 2013. This, his first book, is the result of that effort.