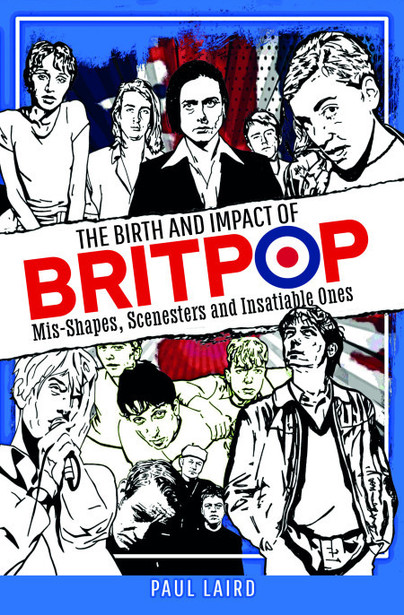 The Birth and Impact of Britpop (Hardback)

Mis-Shapes, Scenesters and Insatiable Ones

Add to Basket
Add to Wishlist
You'll be £16.00 closer to your next £10.00 credit when you purchase The Birth and Impact of Britpop. What's this?
+£4.50 UK Delivery or free UK delivery if order is over £40
(click here for international delivery rates)

"The Byron of Britpop does not disappoint! A sparklingly delicious, spiky tribute to outsiderdom. Made me want to don the war paint and start a band again." – Gary Cosby, signer with Lick.

"An impressive take on the musical and cultural phenomenon tagged "Britpop". Paul goes deep into the causes and roots of the scene, often with surprising revelations." – Stephen Street, producer of Blur, Sleeper and many others.

"Laird's voice sings from the page, bursting with energy and attitude. His stated aim was to write "something honest, something passionate, something that captured what it meant to be young, to be an outsider and to be part of something." He's succeeded, in style. A triumph." – James Cook, member of The Flamingoes and author of Memory Songs and In Her Room.

"A both-barrels blazing account of the last great musical movement. Full of insight, energy and love - this is the definitive book on Britpop." – Jude Cook, member of The Flamingoes and author of Jacob's Advice and Byron Easy.

"Brilliantly written, this really is the Britpop book that is missing. I am in awe." – Nick Amies, author of Where Did It All Go Wrong - Oasis and the Millenium Meltdown, 1995-2000 and She's Electric.

Remember the ninteties? Of course you do. Cool Britannia, New Labour, Blur vs Oasis, Geri Halliwell’s Union Flag dress, TFI Friday, “wasssssuuuuuuppppppp”, Opal Fruits turning into Starburst without anyone asking your permission…crazy times. This book doesn’t have anything to say about Geri’s dress or Opal Fruits but it has lots to say about Britpop. But this isn’t a book about the Britpop you think you know about, this is the story of a truly remarkable period of creativity in British guitar music told through the experiences of someone who was there from the first note of “Popscene” through to the run out groove of “This is Hardcore”. This is the story of the Britpop that didn’t make it onto the evening news or the cover of The Face. This is the story of the bands nobody remembers but that everybody should. This is the story of what it was like to be an outsider in 1991 and be too cool for school by 1994. This is the story of a magnesium flash in British popular music that has, for good or ill, defined British guitar music ever since. Here are Flamingoes and Pimlico, Strangelove and David Devant and His Spirit Wife, The Weekenders and Thurman…and Blur, Pulp, Oasis, Sleeper and Elastica too. These are Britpop memories from someone who was actually there. The definitive story of Britpop…


A really different look at the Britpop era told from the authors perspective. I really enjoyed it and found myself really reminiscing throughout.

It's an informative and compelling book, a good introduction to Britpop and the most influential book.
I appreciated the style of writing and found it well written.
Highly recommended.

Always interesting to read books with an insight into those ground breaking music times.

I really did enjoy this book having been 8 right in the Brit pop heyday I lot my knowledge was in retrospect and my love of the music was found long after so it was it interesting to hear a personal perspective of the time... for me and I think the author feels the same there is not a better time in British history in terms of youth voice and music. Something that has lasted a longer than other so called youth “fads”.

Loved the artwork in the book, was real nice touch.

Currently listening to she bangs the drums while writing this wishing as I often to do that I had been older in the 90’s to enjoy it first hand rather than being a watcher from a far in my spice girl tee.

Be here now and then with this book, for fans who lived it and fans from later generations who long to have been there.

The Birth and Impact of Britpop by Paul Laird is a fascinating look at short-lived but quite influential scene that was called Britpop. Both music history and somewhat memoirish, the book shows how music impacts the individuals who listen as well as the culture within which it lives.

For those who remember it intimately, this will be a chance to relive some of those moments and probably learn a bit about the bands that you didn't know. The amount of familiarity is as much geographically influenced as it is genre influenced. Those in the US will, depending on how you listened to music at the time, likely have a lower band recognition ratio than those in the UK. That said, the book speaks to those with even a minimal interest in Britpop music itself. I'll try to explain.

First, my situation. During the early 90s I had been to the UK several times and knew a number of people there with whom I shared musical tastes (which is to say broad tastes) but lived in the US. I was also on campus for studies and teaching, so caught anything that came that way (especially since I was a DJ for a time on the university's radio station). So I heard some of the bands and music that didn't quite catch on here. So I am somewhere between the person who listened to either album rock stations or pop stations only and the person who was both physically and culturally closer to the scene.

All that is to say that the nostalgia aspect of this book will, I think, strike far more readers than just those who vividly remember Britpop. I think the idea is pretty straightforward for those people, plenty of memories. Because Laird tells us how the music affected him, what some songs meant in his life (not just what a song "meant"), and how his fandom changed over time the reader has an additional way into the book than just their memories of Britpop. For instance, my high school and early adult years were the 70s (class of '76), yet I could relate to what the music did to and for Laird. It was nostalgic for me less because of the specific music he cites but because of the dynamics of growing up when music is an important part of your life. I think no matter what music you grew up with, this book will have you remembering and reliving some of those moments.

Having gone off on that tangent, I want to make sure to highlight how wonderful the book is in relation to the Britpop scene. The way to read this book is with a playlist handy, or at least with your preferred listening source handy. While it helps in general for (re)capturing the feel it also really drives some of the personal stories home better. The one that comes to mind because I ended up listening to the song several times is his story around Sleeper's What Do I Do Now? Spend some time listening to the tracks Laird talks about, imagine both what he describes about his life as well as what songs from your past might slot in as having the same affect.

I would highly recommend this not only for those who remember Britpop but every music lover for whom music has been their lifelong companion.

This is the authors journey with what was coined Britpop with the music of the early 1990's as he describes his relationship with Blur, Oasis and some of the other bands, yes it is subjective but isn't all music though. I did enjoy it overall as it bought back memories for me of some of the bands in their early days.

Songs have a power over people. The same song can make people mad, make people glad, and make people dance. A song can remind of childhood, bad schooldays, worse love affairs, even lost pets. Mothers want a particular song for giving birth, couples have their song, and at the end of things people get played out by a song, either sung or just read. Growing up I discovered music late, AM music was my family's jam, but when I found songs that spoke to me, I wanted more. Writer and podcaster Paul Laird felt the same way about music that I did, but his was Britpop, and it made his childhood not just bearable, but survivable. In The Birth and Impact of Britpop: Mis-Shapes, Scenesters and Insatiable Ones writes about the music that flooded the airwaves in the nineties, on both sides of the ocean, and what those songs meant for him.

Paul Laird was young, less than middle class and religious which made him a bit of an outsider in many ways. Needing something, anything to make his own, that spoke to him he found a friend, a companion and a love in music. Not just music but Britpop, songs that sang to him, songs that make him feel that someone was getting him, and songs that he couldn't get enough of. The author worked fast food for money to keep up with bands, reading New Music Express, buying singles, even listening to people he didn't like to finds bands. And here he writes about them. All the major bands are covered, Blue, Oasis, Pulp, Suede, with biographies, discussions of songs, music, influences, if they took off, if they crashed to the earth. But mostly about what he thought of them, and how they made him feel.

The book is well written and balanced between bands. The author has is favorites, but this is not history of the scene, nor a guide to great music of the nineties. This is a personal book about a boy, with a soundtrack. As I wrote a lot of bands are covered, even bands that I was unfamiliar with, but living in America in the 90's music info came from MTV, or the cool CD shops that had imports. I really enjoyed the way he presented the bands, and how he wrote about various issues that were present in the scene, sexism being a big thing, and what he thought about it.

I very different music book, which I enjoyed quite a bit. This was personal writing about songs, and feeling like an outsider in your own country, and how music helped. And I got a list of bands that I never heard of, but if Paul Laird likes them well I will for sure give them a listen.

This book is unique in that it more about the author's experience of Britpop as a teenager finding himself through music than an objective report or a testimony and quotes from the music industry. It speaks to what Britpop meant for it's young fans- with the idea that the rest has already been written. Enjoyable.

Paul Laird is a writer and podcaster who has been celebrating and critiquing Britpop since 2015. His Britpop memories offer a unique insight into the era. As well as writing about Britpop he is a regular contributor to BBC Radio Scotland’s “Classic Scottish Albums” podcast.

View all events View all anniversaries
Other titles in White Owl...
Re-Release