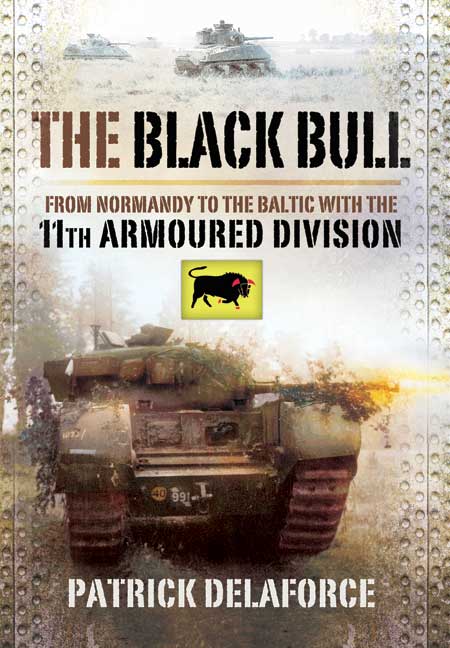 Click here for help on how to download our eBooks
Add to Basket
Add to Wishlist
You'll be £4.99 closer to your next £10.00 credit when you purchase The Black Bull. What's this?
Need a currency converter? Check XE.com for live rates

The 11th Armoured Division, famous for its Black Bull insignia, was widely recognized as being among the best armoured divisions in north-west Europe during the Second World War. This book tells the story of the Division in the words of the soldiers who fought with it: of its part in the three ferocious battles in Normandy – Operations EPSOM, GOODWOOD and BLUECOAT, the great 'Swan' to Amiens, the taking of Antwerp; right flanking for MARKET GARDEN, back-up in the Ardennes and the final slog into Germany across well-defended river barriers, to the liberation of Belsen, Lübeck and the Danish frontier. The Division suffered 10,000 casualties, with almost 2,000 lost in action, and so this is also a story of courage and the hardships of a winter campaign, of being wounded, comradeship and fighting fear.

Following the break-out battle encounters of General 'Pip' Roberts, whose Armoured Division took part in Operations EPSOM, GOODWOOD and BLUECOAT, this is the story of the those men who were thrown into the thick of the action during the final crusade into Germany with the overhanging loss of thousands of lives and tens of thousands of casualties. Noted for their symbol of the Black Bull, their engagements are aptly described and recounted from the first hand accounts of troop commanders, riflemen, tank crews and the like, and are compiled in this story of courage and determination by an esteemed historian who himself fought in the division from June 1944 to VE Day. Horrors, fear, apprehension, and hardship are all apparent in this story - an inspiring and captivating read for all those who take an interest in history and military action.

Often divisional histories are factual affairs and lack the personal touch of the men who served with the formation. Others are biographies of the war time experiences of the men who served with a particular unit. However this book combines the two. The factual data on the Division is presented but it is interspersed with personal anecdotes from the letters and diaries of the brave men of the 11th Armoured. There are first hand descriptions of the life at the front line from various men and these comments cover the range of the division's constituent regiments.

The author uses the recollections and personal papers of the men of the Division to great effect. These anecdotes bring life to the division's history and present the raw emotions of combat. He does not concentrate on his own personal exploits as some biographies do but rather on the story of the division with some personal notes. He presents a few pictures of himself and limited notes from his own diaries. There are plenty of recollections from other members of the division.

This book is a splendid read and very engrossing. If you are interested in the Northern European campaign of 1944/45 then this book deserves serious space on your bookshelf.