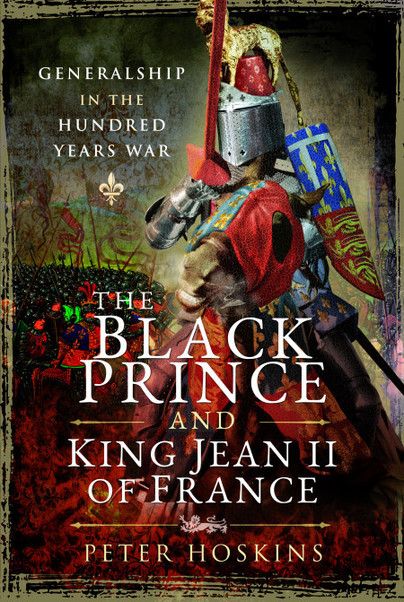 The Black Prince and King Jean II of France (Hardback)

Generalship in the Hundred Years War

Add to Basket
Add to Wishlist
You'll be £19.99 closer to your next £10.00 credit when you purchase The Black Prince and King Jean II of France. What's this?
+£4.50 UK Delivery or free UK delivery if order is over £40
(click here for international delivery rates)

Order within the next 3 hours, 45 minutes to get your order processed the next working day!

What were the essential qualities for a military commander during the Hundred Years War? How important were strategic vision, tactical skill and powers of leadership in medieval warfare? These are the questions that Peter Hoskins explores in this perceptive study of the careers of Edward, the Black Prince who led the English army to victory at the Battle of Poitiers and the opponent he defeated, the French King Jean II. Their contrasting characters and backgrounds are considered as is the military tradition of their time, but the primary focus of the book is a close comparison of their strengths and weaknesses as soldiers as they were revealed on campaign and on the battlefield.

The Black Prince was one of the most admired generals of his generation, a charismatic leader, a shrewd tactician and strategist and a decisive commander. In contrast King Jean was impulsive, driven more by pride, his sense of honour and personal objectives than strategic priorities. When he was put to the ultimate test at Poitiers he lost control of his army, while the Black Prince took the initiative personally to secure victory against the odds.

Peter Hoskins analyses the leadership qualities of the prince and the king according to the principles of war enunciated by Sun Tzu and Vegetius as well as the modern principles of war of the United Kingdom armed forces. He gives readers a fascinating insight into the nature of command and the conduct of war in the Middle Ages.

The Black Prince and King Jean II is an enjoyable narrative history with some cogent analysis of command in the Hundred Years’ War. His clear writing makes it easy to follow Hoskins through a complex period, and the double-sided biographical introduction is a clever way to lead into the heart of this study.

It’s a well researched and well written book, that takes a fascinating in-depth look at the two leaders of the day, a very good insight into military command during the Medieval period in Europe. I found it an interesting book to read, but at the time of reading knew it wouldn’t appeal to everyone.

If you have an interest in military leadership and history then this is definitely a book you should pick up.

The Black Prince was a great leader and this is a book that investigates his way of commanding in battle, but also his charisma as a leader of men. Jean II instead was a king (unlike the Black Prince who died before his father Edward III) with many defects, but also merits such as military reforms that created a permanent army for France, with the result of the final victory (after many battles and bloodshed) in 1453 in Castillon. Hoskins, with a very easy to read and engaging book, examines the two personalities satisfactorily. The same maps illustrating the clashes are very well made.

I have always enjoyed reading about the Black Prince, and this book was no exception. I felt that we were shorted in history, and this book just reaffirms that. I believe that we would have seen ever greater things from him had he lived longer.

History lovers will LOVE this book! It is full of rich detail, easy to read, and breathes life back into the Edward, or as we refer to him, the Black Prince, giving us more on his relationship with the French King. Absolute must read! With their advantages and disadvantages on the battlefield, tactics play into this book, and for those who enjoy military history and the maneuvering of armies, this book will keep you glued to your seat.

Great for those who have an interest in military history or the Hundred Years War.

My degree is in history with a particular focus on the Black Prince,. I really enjoyed this book, it was well written, accessible and clearly researched. An excellent addition to my library, thank you.
I highly recommend this one.

This was a delightful read. I loved how much information there was. The author was very thorough. I like that the book was easy to read and I was able to read it quickly. Since I did not know much about King Jean II and the Black Prince it was very informative.

I really enjoyed this book I have often wanted to know more about the black prince and I found this very well written.

The author explains the differing conditions that influenced the decisions taken by The Black Prince and Jean II. Clearly both were constrained by the constant issues that limit all military and political actions; logistics, resources and will. That The Black Prince did rather well in the Languedoc and in the Poitiers campaign demonstrated his experience, attitude and his acceptance that he needed to provoke to get the French to engage in battle. It is fairly easy to find more modern interpretations of each of their actions that fit the basic Sun Zu/ Clausewitz tenets in current leadership theory and the section in the book that expands this is very useful. The location maps are good and add to the descriptions of the campaigns.