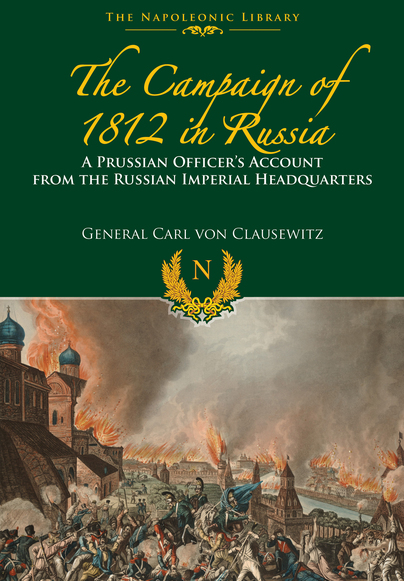 A Prussian Officer's Account From the Russian Imperial Headquarters

Click here for help on how to download our eBooks
Add to Basket
Add to Wishlist
You'll be £4.99 closer to your next £10.00 credit when you purchase The Campaigns of 1812 in Russia. What's this?
Need a currency converter? Check XE.com for live rates

On 23 June 1812 the French Grande Arme, over 600,000 strong and composed of men from the many nations that had become part of Napoleons empire, poured over the Russian border. In defence of Russia, an army of approximately the same number faced them. The campaign was disastrous for Napoleon, and it marked the beginning of his decline in power.

Amongst those who participated in the campaign was von Clausewitz. This renowned Prussian military strategist and historian defected from the French Army and joined the Russian Imperial headquarters where he spent the campaign close to the senior Russian officers who made the critical decisions.

The campaign raised many questions which continue to be debated to this day and Clausewitzs considered account has long been regarded as a highly valuable source. His expert analysis of the Battle of Borodino indicates that he was heavily involved in the engagement as a staff officer, whose duties would have entailed his constant travelling round the battlefield.

He was present at the secret Convention of Tauroggen, and his account of this important treaty and its effect in bringing about the defection of the Prussian corps from the French is unique.

First published in 1992 and now again in 2015, this title is sub-titled A Prussian Officer’s Account from the Russian Imperial; Headquarters, and has an Introduction by George Nafziger. On 23rd June 1812 Napoleon’s Grande Armee – over 500,000 strong – crossed the Russian border. An equally massive Russian army faced them; the ensuing campaign was to be a catastrophe for Napoleon. Although the battle of Borodino 7th September 1812, which resulted in heavy losses on both sides, allowed Napoleon to reach Moscow, his stay there was short and of no value. By the time the Emperor had retreated to westwards back to the Berezina River in late November 1812, his army had been reduced to just one fifth of its original strength. General Clausewitz analyses all the significant players and provides excellent eye witness accounts of the battle of Borodino and the Convention of Tauroggen, an armistice signed on 30th December 1812 between the Prussians and the Russians. There are14 maps to support the text.